Reminder: Many USCIS Filing Fees Will Increase on December 23, 2016 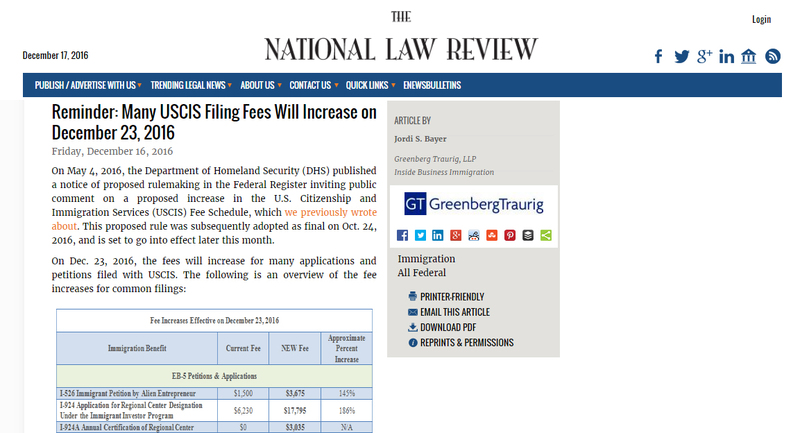 On May 4, 2016, the Department of Homeland Security (DHS) published a notice of proposed rulemaking in the Federal Register inviting public comment on a proposed increase in the U.S. Citizenship and Immigration Services (USCIS) Fee Schedule, which we previously wrote about. This proposed rule was subsequently adopted as final on Oct. 24, 2016, and is set to go into effect later this month.

On Dec. 23, 2016, the fees will increase for many applications and petitions filed with USCIS. The following is an overview of the fee increases for common filings:

USCIS fees will increase by an average of 21 percent. However, as evidenced by the above chart, petitions and applications under the EB-5 program are subject to the highest fee increases, with hikes of more than 100 percent for Forms I-526 and I-924 as well as the introduction of a new fee of $3,035 for filing the Form I-924A. EB-5 regional centers are required to file a Form I-924A annually (this year, by Dec. 29, 2016) or on request to demonstrate continued eligibility for their designation and there was previously no fee associated with this filing. 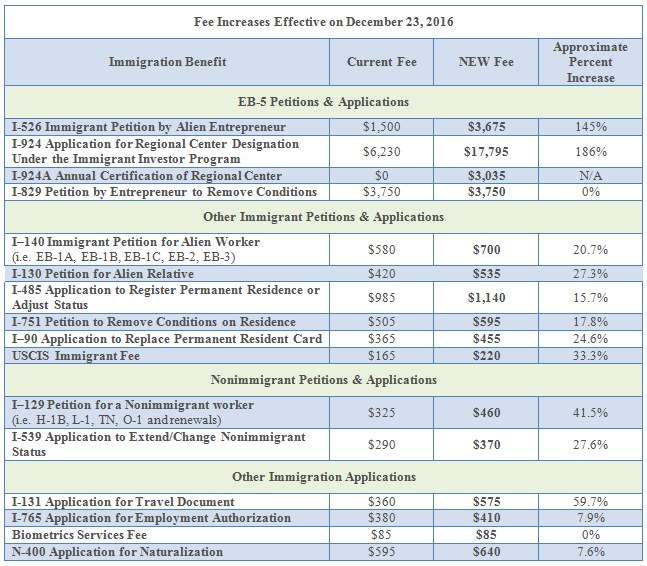 USCIS has not adjusted its filing fee schedule since Nov. 2010. As it is funded entirely by application and petition fees, the Service maintains that this significant increase in filing fees is necessary in order to pay for the higher cost of case processing, fraud detection, national security and customer service. It is our hope that with these improvements will also come faster processing times.

We recommend submitting all imminent filings to USCIS well in advance of this scheduled fee increase; all petitions must be sent out by Dec. 21, 2016 as Dec. 22, 2016 is the last date that USCIS will accept the current filing fees. Starting Dec. 23, 2016, USCIS will reject cases that do not include filing fee checks reflecting the increased fee schedule.