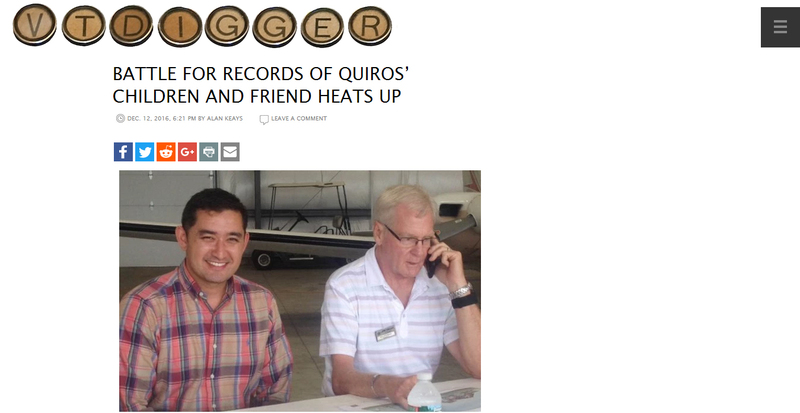 Ary Quiros, left, and Bill Stenger at a news conference.

Attorneys for the financial firm Raymond James are resisting a bid to have them turn over financial records of Jay Peak resort owner Ariel Quiros’ children and business partner, at least without a court order.

Investors suing Quiros “made no attempt to demonstrate why their financial records are relevant to this action, much less so probative that their privacy should be invaded,” Deborah Corbishley, an attorney for Raymond James, wrote in a recent filing.

The investors bringing a class-action fraud suit against Quiros filed a motion last month seeking records held at Raymond James, a financial institution he used. The motion asks for documents the firm holds regarding Ary and Nicole Quiros — who are Ariel Quiros’ son and daughter — as well as Jong W. Choi, a longtime friend and business associate, and another person who is unnamed.

“The courts usually require (the documents be produced) only when the accounts and people are directly relevant to the claims in the case,” Corbishley wrote.

In this case, the attorney wrote, none of the accounts involved transfer from Jay Peak accounts, which is where the fraud allegations against Ariel Quiros arise.

His children, Choi and the unnamed person are not defendants in the lawsuit, which is headed by lead plaintiff Alexandre Daccache, of Brazil.

The Daccache lawsuit was brought on behalf of a proposed class of 836 people who collectively invested more than $400 million in the series of projects headed by Ariel Quiros and Bill Stenger, Jay Peak’s former CEO. The projects spanned eight years in northern Vermont, with money raised from foreign nationals seeking green cards through the federal EB-5 immigrant investor program.

Defendants in the lawsuit are Ariel Quiros, Stenger, Raymond James and Joel Burstein, a branch manager of Raymond James in Coral Gables, Florida, where Ariel Quiros did business. Burstein is also Quiros’ former son-in-law, who had been married to Nicole Quiros.

The suit was filed after the U.S. Securities and Exchange Commission as well as the state of Vermont brought investor fraud lawsuits against Stenger and Ariel Quiros. Those actions claimed the two men misused $200 million in investor funds meant to pay for projects in Vermont’s Northeast Kingdom, including hotels at Jay Peak and Burke Mountain.

Ary Quiros, the son, operated the resort at Burke Mountain until last spring, when it entered receivership. Michael Goldberg, the court-appointed receiver, has overseen the property since shortly after the filing of the state and federal investor fraud lawsuits.

Raymond James said in its recent filing that it has turned over records of an account Ariel Quiros held jointly with his son, but not the son’s personal account.

Corbishley also wrote in the filing that the firm didn’t provide records in its system related to Nicole Quiros because they referred to her divorce from Burstein.

“(B)ecause Mr. Quiros’ daughter and Mr. Burstein divorced, Mr. Burstein received financial and other disclosures during the divorce proceedings,” Corbishley wrote. “Plaintiffs’ counsel has not explained why they are entitled to invade the divorce discovery and disclosures.”

The investors are also seeking Raymond James account documents for Choi, a friend and business associate of Ariel Quiros.

He served as a principal officer for AnC Bio Korea, a company that transferred intellectual property rights to AnC Bio Vermont, another project by Ariel Quiros and Stenger. However, that $110 million biomedical center planned for Newport never materialized, with federal regulators calling it “nearly a complete fraud.”

In addition to Quiros’ children and his friend, plaintiffs in the class-action case are seeking documents relating to an account belonging to an “individual (Raymond James) wouldn’t identify,” but for whom Ariel Quiros has power of attorney.

Corbishley wrote in the recent response that without a court order, Raymond James is not in a position to turn over the documents, especially without the parties receiving notice and given an opportunity to contest the release.

“It will, of course, abide by any order of the Court with respect to those individuals, but that is not Raymond James’ right to negotiate,” the attorney added.