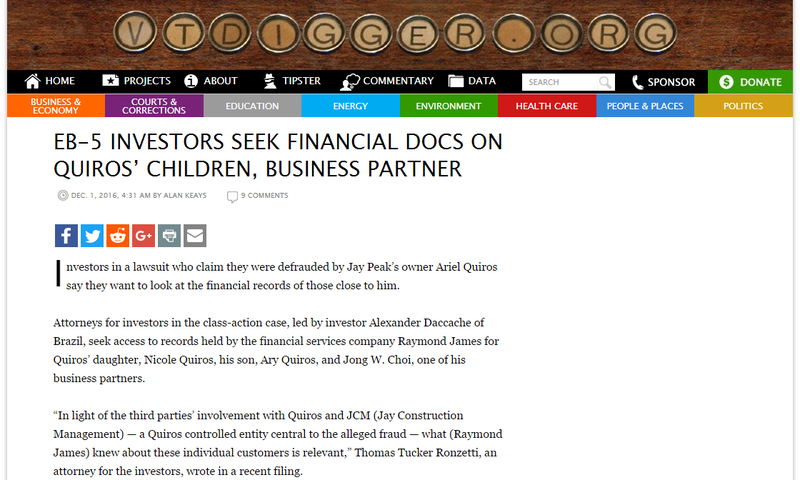 Investors in a lawsuit who claim they were defrauded by Jay Peak’s owner Ariel Quiros say they want to look at the financial records of those close to him.

Attorneys for investors in the class-action case, led by investor Alexander Daccache of Brazil, seek access to records held by the financial services company Raymond James for Quiros’ daughter, Nicole Quiros, his son, Ary Quiros, and Jong W. Choi, one of his business partners.

“In light of the third parties’ involvement with Quiros and JCM (Jay Construction Management) — a Quiros controlled entity central to the alleged fraud — what (Raymond James) knew about these individual customers is relevant,” Thomas Tucker Ronzetti, an attorney for the investors, wrote in a recent filing.

Ary Quiros had operated Q Burke Mountain Resort in Vermont until it was later seized by federal regulators in a civil lawsuit brought by U.S. Securities and Exchange Commission filed against his father, who owned Q Burke at the time. The “Q” has since been dropped from resort’s name, as well signs throughout the property that had been emblazoned with the signature letter.

That lawsuit as well as one by the state of Vermont claim the elder Quiros, owner of Q Resorts, a holding company that includes Jay Peak, and William Stenger, former CEO at Jay Peak, misused $200 million raised through the federal EB-5 visa program. That money was meant to fund development projects in Vermont’s Northeast Kingdom, including hotels at Jay Peak and Burke Mountain.

Nicole Quiros, Ariel Quiros’ daughter and an accountant, had been married at the time to Joel Burstein, a branch manager at Raymond James in Coral Gables, Florida. The class-action lawsuit claims Burstein helped Quiros set up a web of complex financial transactions that were used in the fraud.

In addition to information about Nicole Quiros’ account, the attorneys for the investors are seeking from Raymond James an email concerning her that contains her resume as an attachment.

“If the resume shows that Nicole Quiros worked for a Jay Peak or Quiros-affiliated entity while married to Burstein,” Ronzetti wrote, “Burstein would have had an additional incentive to further the Jay Peak fraud.”

Jong Weon (Alex) Choi, a longtime business associate of Quiros, was president and owner of Jay Construction Management, as well as a director of Q Resorts, Ronzetti wrote in the recent filing.

He had also has served as a principal officer for AnC Bio Korea, which transferred intellectual property rights to AnC Bio Vermont, a company owned by Stenger, Quiros and Quiros’ son, Ary, that had been responsible for coordinating the construction and operation of a proposed biotech facility in Newport that never materialized.

AnC Bio Vermont was banking heavily on EB-5 immigrant investors, seeking $110 million from 220 foreign investors. Investors in the program, put up $500,000, plus an administrative fee, in qualified projects. If the project creates 10 jobs, the investor becomes eligible for permanent U.S. residency.

Federal regulators in the lawsuit they filed in April called that project “nearly a complete fraud.”

The attorneys for the investors are also seeking documents relating to an account belonging to an “individual (Raymond James) wouldn’t identify,” but for which Ariel Quiros has power of attorney.

“Given the manner in which Quiros funneled money through various accounts, this additional account may be among them and show the movement of funds that facilitated the Jay Peak fraud,” Ronzetti wrote.

Ary and Nicole Quiros, as well as Choi, were not named as defendants in the lawsuits by the state and federal regulators or in the Daccache class-action case.

The Daccache class-action investors’ lawsuit names as defendants Ariel Quiros and Stenger, as well as Burstein and Raymond James, and it is pending in federal court in Miami where Quiros’ many businesses are located.

Attorneys for Raymond James could not be reached Tuesday for comment.

Meanwhile, Stenger has settled his case with the SEC, and the state action against him remains pending. Quiros, who has denied any wrongdoing, is contesting both the state and federal SEC lawsuits.

Last week, the judge in the SEC case issued a strongly worded preliminary injunction against Quiros, calling him the “architect” of the fraud scheme. The judge froze his assets related to the case and barred him from participating in the EB-5.

According to the Daccache lawsuit, the action was brought on behalf of a proposed class of 836 people who invested more than $400 million in the series of projects headed by Quiros and Stenger over eight years in northern Vermont as part of the federal EB-5 immigrant investor program.