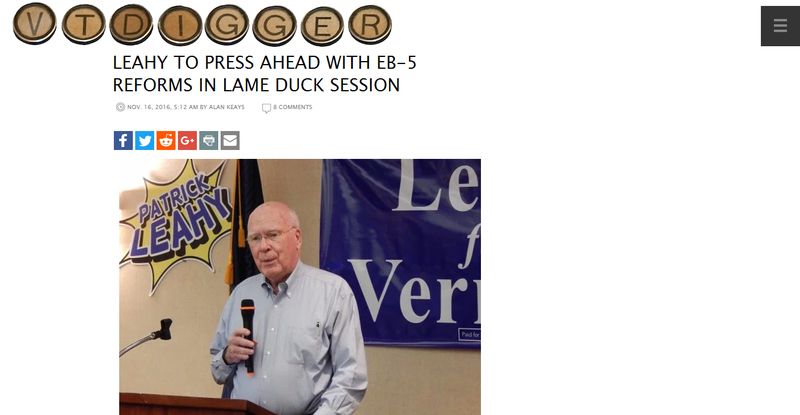 U.S. Sen. Patrick Leahy is again gearing up to push for EB-5 reforms through the upcoming lame duck session of Congress, however, just what a looming Trump presidency will mean to that effort remains unclear.

In late September, Congress extended the EB-5 immigrant investor legislation through a continuing resolution that funded government operations through Dec. 9.

But, Leahy voted against that continuing resolution because he said it only extended the existing EB-5 program and did not include proposed reforms he believed were needed to protect against fraud, which he said is “rampant.”

The largest alleged investor fraud case in the state’s history involved developers, including Bill Stenger of Newport, using the EB-5 program to fund projects in Leahy’s home state of Vermont.

Leahy, who had been a vocal supporter of the EB-5 program and has close ties to Stenger, has said he would feel betrayed if the allegations against Stenger were proven.

Now, with the lame duck session set to kick off today, the EB-5 reform package proposed late this summer is back on the table, but what’s in store for its future remains in doubt weeks before President-elect Donald Trump takes office.

“That would be pure speculation,” David Carle, Leahy’s spokesman, said Monday when asked what the prospects are for EB-5 reform legislation. “I’ve never heard Trump comment on the program one way or the other.”

About 700 immigrant investors from 74 countries invested in Northeast Kingdom projects in exchange for green cards. The immigration status of about 400 investors is in jeopardy as a result of the fraud. Many have been granted temporary visa extensions, but their permanent residency in the United States is in question unless Leahy is able to get an exemption.

Trump has said he would deport 2 million to 3 million immigrants who have committed crimes and are in the United States illegally.

Carle said Leahy, elected to his eighth term in the Senate earlier this month, is continuing to back proposed EB-5 changes. “He’s made it very clear he does not support doing the program without reforms,” he said.

U.S. Rep. Peter Welch said Monday he wasn’t sure exactly what to expect in the upcoming lame duck session regarding EB-5 legislation. 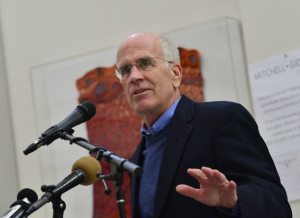 Vermont Congressman Peter Welch talks during a press conference in Brattleboro, Vt., about lessons learned from the closure of Vermont Yankee nuclear power plant in Vernon on Oct. 14.

“The election throws a lot of things into upheaval, including EB-5,” the Vermont Democrat said. “I have no idea what Donald Trump’s position is on EB-5. He never spoke on it during the campaign.”

Welch said he would be surprised to see Trump, a New York City real estate developer, take the lead as an EB-5 reformer.

“This is something that has benefited his industry and it’s been used very widely in New York City,” Welch said. “In fact, many of the people who have questions about the EB-5 program and raise the need for reform point out that it was essentially started to help high unemployment, rural areas and it’s being used in high-income urban areas like Manhattan.”

Welch said he was also unsure if even a “straight” extension of the EB-5 program, minus reforms, would pass during the lame duck session. He said he would defer to Leahy on that matter.

“The center of action on this has always been the Senate Judiciary Committee,” Welch said, pointing out that Leahy is the ranking Democrat on that committee.

Michael Goldberg, the court-appointed receiver overseeing the properties in Vermont at the center of the investor fraud allegations, said Monday he expected Congress to pass a “straight” extension of the EB-5 program by the Dec. 9 deadline, minus the proposed reforms.

Goldberg said he remains optimistic that the new Congress will take up the reform legislation by next spring.

Rep. Bob Goodlatte, R-Va., and House Judiciary Committee chairman, this summer introduced the reform legislation, officially known as The American Job Creation and Investment Protection Reform Act of 2016. The bill never advanced out of the committee.

As Congress begins work today on government spending bills due by Dec. 9, Goodlatte will continue to push to ensure that any reauthorization of the EB-5 program contains reforms, an aide to the House Judiciary Committee said Monday.

In addition to calling for increased oversight measures to protect against fraud, the bill would make other changes.

For example, the program now requires an investor to put up at least $1 million in a project that creates at 10 jobs in United States. That minimum investment is lowered to $500,000 in more rural areas of the country, or places dealing with high unemployment rates. Goodlatte’s bill raises those minimum investments to $1.2 million and $800,000.

The EB-5 program has been embroiled in scandal in Vermont. It came to a head in April when federal and state lawsuits were filed against Stenger, former CEO and president of Jay Peak, and Miami businessman Ariel Quiros, owner of Q Resorts, a holding company that includes Jay Peak.

The two men are accused in the lawsuit of misusing $200 million in investor funds raised through the EB-5 program meant to pay for several projects including hotels, condos and a proposed biomedical center in Newport.

A key provision in the Goodlatte’s reform package provides some relief to investors in projects heading by Stenger and Quiros that never materialized, costing them an opportunity at permanent U.S. residency due to the lack of job creation.

For example, the proposed biomedical center in Newport, AnC Bio Vermont, which has been called “nearly a complete fraud” by federal regulators, was never built. That means jobs expected to be created through its construction and work taking place there never happened.

Under the reform legislation, foreign investors in that project could use money recouped for them through litigation and other actions to reinvest in another qualified EB-5 project anywhere in the country.