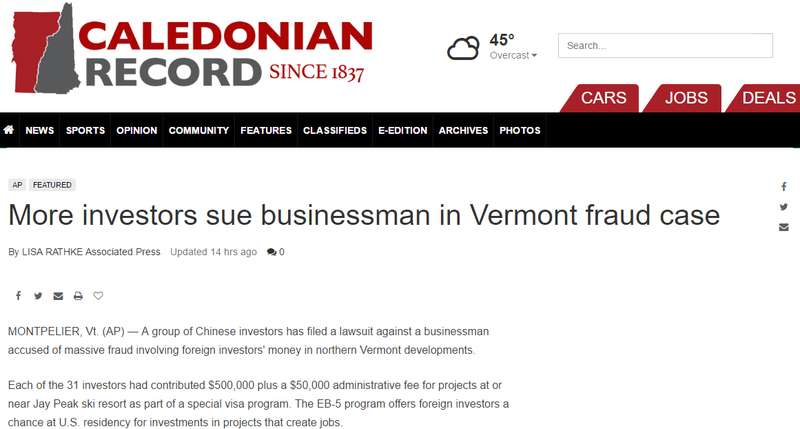 A group of Chinese investors has filed a lawsuit against a businessman accused of massive fraud involving foreign investors' money in northern Vermont developments.

Each of the 31 investors had contributed $500,000 plus a $50,000 administrative fee for projects at or near Jay Peak ski resort as part of a special visa program. The EB-5 program offers foreign investors a chance at U.S. residency for investments in projects that create jobs.

The lawsuit seeks more than $17 million in damages. It was filed Nov. 7 in Miami against Ariel Quiros, the financial services company Raymond James & Associates, and Joel Burstein, Quiros' then-son-in-law who worked at Raymond James. VTDigger first reported on the lawsuit filing.

"Each of the Jay Peak Partnerships was part of a Ponzi Scheme orchestrated or facilitated by the Defendants," the suit said. "Each of the Plaintiffs has lost the sum of $550,000 in whole or in part as a result."

Quiros, the owner of Jay Peak, and former Jay Peak president Bill Stenger, were accused by the U.S. Securities and Exchange Commission and the state of Vermont in April of misusing about $200 million from foreign investors. Quiros is also accused of improperly diverting about $50 million for his personal use.

The lawsuit alleges Quiros used EB-5 money that was supposed to stay in escrow for a hotel, indoor water park and ice rink to buy Jay Peak in 2008.

Quiros, Burstein and Burstein's supervisor "developed a plan for Quiros to acquire the $23.5 million that he needed to purchase the stock of Jay Peak, Inc. that was nothing short of theft of the Phase I and Phase II investors' funds," the lawsuit states.

Some of the plaintiffs had invested in other phases such as a biomedical research park that authorities say will not be built.

"By raising money in new EB-5 Investment Offerings, Quiros was able to replenish partially the funds taken from the old investors but, as in all Ponzi Schemes, in the end the investors are left with little to nothing," the lawsuit said.

A class-action lawsuit also has been filed in Miami against Quiros, Stenger, Raymond James and Burstein. The lawsuit seeks to recover funds the investor says were misused, commingled and stolen.