Milne gets shot at Leahy in VPR debate 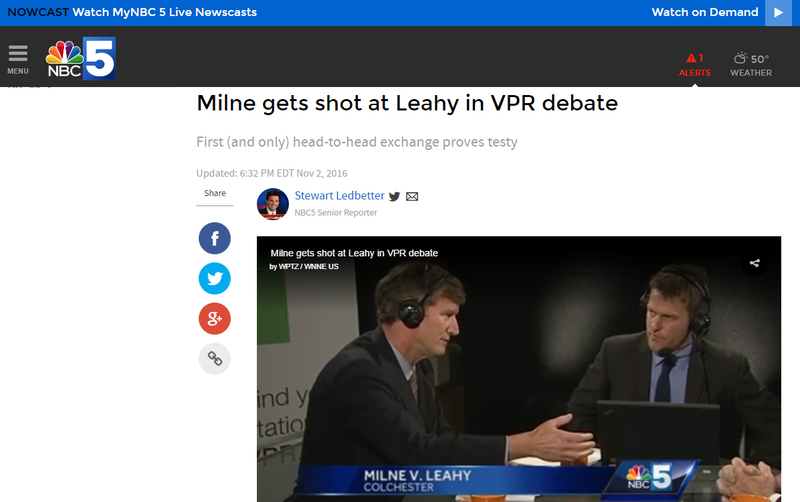 In the final week before Vermont voters cast their ballots, Republican U.S. Senate candidate Scott Milne finally got what he wanted -- a debate with incumbent Democrat Patrick Leahy.

The noon appearance on Vermont Public Radio Wednesday was the only one-on-one exchange Leahy agreed to participate in before the election.

It’s clear there is no love lost between the two men.

"I’m sitting across from a man who got $5,000 in dirty money from law firm in Boston," Milne said of Leahy as the debate got underway.

Milne repeatedly chastised the seven-term lawmaker for his breadth of special interest contributions, including donations from partners at Thornton Law Firm which the Boston Globe has reported reimbursed employee donations made to Democrats.

Leahy has resisted calls he return the money as other New England politicians have done.

The Democrat repeatedly complained Milne had run a campaign lacking in policy, with nothing positive to say.

"He attacks me. If it makes him happy, go ahead and do it," Leahy told moderator Peter Hirschfeld.

Milne referred to Leahy as a career politician who cozies up to lobbyists and had little to show for his 42 years in Washington.

"My election will do more to change campaign finance structure in Washington than anything my opponent could do in next six years," Milne said.

But Leahy said his seniority in the Senate helps direct federal money back to Vermont.

"People have seen what I’ve done for Vermont," Leahy said. "After Hurricane Irene I could bring far more money to Vermont than anyone else."

During one section of the debate, Leahy asked Milne to name three foreign leaders he admires, noting Milne hopes to serves on the Foreign Relations committee.

Milne named Angela Merkel of Germany, and "the new leader" in Britain, without naming Theresa May.

The two agreed marijuana legalization should be a issue left to the states, and agreed every Supreme Court nominee deserves an up or down vote, something Senate Republicans have blocked all year with President Obama’s nomination of Judge Merrick Garland.

Milne may be trailing in the polls but assured listeners, "I believe, when the votes are counted, it’ll be a big upset. Folks it’s grassroots. It’s possible."

When the debate ended, the two did not shake hands.