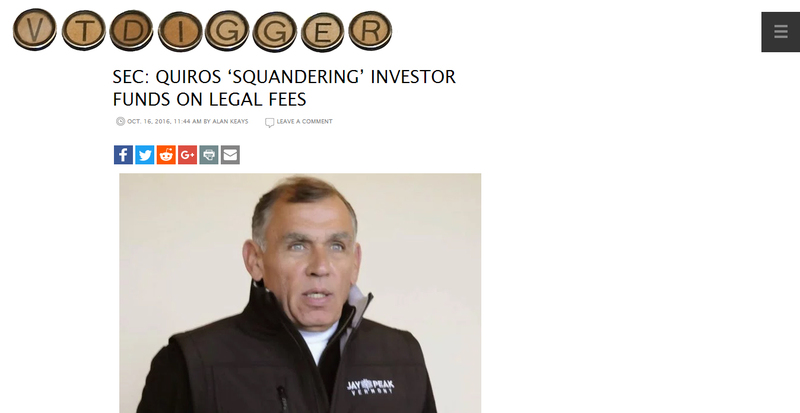 Federal regulators suing Ariel Quiros say he is “quickly squandering” funds from investors he allegedly defrauded by asking a judge to allow him to unfreeze assets to pay “outlandishly high” legal fees in the civil fraud case brought against him.

“Quiros is requesting more than $1.5 million to pay his attorneys’ fees and costs from April through August 2016,” Christopher Martin, a lawyer representing the U.S. Securities and Exchange Commission, wrote in a motion filed late this week in federal court in Miami.

“At that rate, Quiros will be seeking $3.6 million annually for attorneys’ fees and costs, plus an
additional $180,000 for living expenses,” Martin wrote. “Not only is this burn rate excessive, it also greatly exceeds the amount Quiros received for mortgaging the Setai Condominium.”

The SEC filed its lawsuit in April against Quiros, a Miami businessman, and William Stenger of Newport, alleging the two developers headed the largest fraud case in the state’s history through a “Ponzi-like” investment scheme.

The regulators accuse the two men of misusing more than $200 million in investor money raised through the EB-5 visa program to fund development projects in northern Vermont, including hotels and a proposed biomedical center in Newport they termed “nearly a complete fraud.”

Attorneys for Quiros have filed three motions since the cases against him began in April seeking attorneys’ fees totaling more than $1.5 million, including the latest one earlier this month asking for more than $560,000 in legal bills racked up between July 1 and Aug. 31.

His attorneys have asked the judge to allow him to use proceeds from a mortgage on his Setai condominium in New York City to help cover his legal expenses.

Martin countered in his filing this week that Quiros purchased the condo using $3.86 million in investor funds, and those investors would receive no benefits if a mortgage on the property went to pay “exorbitant” legal bills for Quiros.

“(T)he amount Quiros is seeking is greatly excessive and he is quickly squandering investor funds,” Martin wrote, adding, “Notably, the total amount Quiros has requested for just five months of his attorneys’ work significantly exceeds the $1.194 million the Receiver has received from Quiros for mortgaging” the Setia luxury condo.

In May, federal Judge Darrin Gayles approved $15,000 in monthly expenses for Quiros, paid by the Jay Peak receivership. Michael Goldberg, the federal court-appointed receiver, is now overseeing the properties at the center of the alleged fraud case.

Also, the judge allowed Quiros to sell or mortgage the Setai condo to cover “reasonable” legal fees and living expenses.

Martin disputes whether Quiros is paying “reasonable” rates for representation.

“Rather, he is attempting to bill investors – and any money Quiros receives from frozen assets for attorneys’ fees will come straight out of assets that could be used for the benefit of defrauded investors – for a Cadillac defense team,” Martin wrote, “that is billing fees equivalent to representing a multi-millionaire with untainted funds who could pay for such services.

Those rates, the filings state, are comparable to “competitor” firms, both nationally and in the Miami area.

The filings also stated that Goldberg, the court-appointed receiver, had been awarded comparable attorney fees of $638 an hour in the past, another point Martin said is not relevant in the pending matter.

In this case, Martin wrote “Goldberg is significantly discounting his rate and the rates of other partners at his firm to no more than $395 an hour to conserve scarce resources for investors.”

Martin added, “Goldberg has further testified that partners working for him are billing at rates of $260 an hour to $395 an hour, again in an effort to take as little as possible from the Receivership estate and leave more for investors.”

The SEC lawyer also says attorneys’ fees should not be awarded to Quiros for legal work done on other cases pending against him, including a class-action federal action brought by investors and a lawsuit filed by the Vermont attorney general’s office.

If the judge does agree to grant any motions for Quiros for attorneys’ fees, Martin wrote, he should do so at significantly lower rates, and for work done solely on the federal case.

“(T)he Court should limit the rates Quiros’ lawyers can charge to a maximum of $395 an hour, and a maximum of $260 an hour for associates, as the Receiver and other partners and associates working for him, are billing in this action,” Martin wrote.

Quiros is the owner of Q Resorts, a holding company that includes Jay Peak. Stenger is the former president and CEO at Jay Peak.

Stenger settled his case with the SEC last month, agreeing to cooperate with investigators. He still faces the possibility of a monetary penalty, depending on his level of cooperation and ability to pay.

Neither Martin or attorneys for Quiros could immediately be reached Friday for comment.