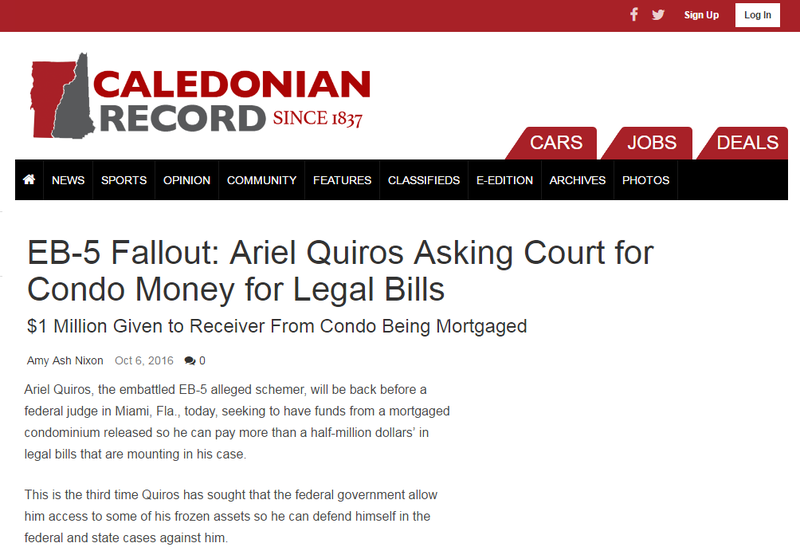 Ariel Quiros, the embattled EB-5 alleged schemer, will be back before a federal judge in Miami, Fla., today, seeking to have funds from a mortgaged condominium released so he can pay more than a half-million dollars’ in legal bills that are mounting in his case.

This is the third time Quiros has sought that the federal government allow him access to some of his frozen assets so he can defend himself in the federal and state cases against him.

Both the federal receiver put in place to take control of the assets owned by Quiros and the attorneys for the federal Securities Exchange Commission (SEC) are opposing the judge releasing the funds Quiros is seeking.

In April, the SEC and the Vermont Attorney General brought related federal and state civil complaints against Quiros, and his former business partner, Bill Stenger, alleging a Ponzi-like scheme which authorities said was designed to defraud international investors in the pair’s EB-5 economic development projects, mainly connected to Jay Peak, but also at Burke Mountain resort, and other associated partnerships.

The pair were accused at the time of having allegedly misappropriated more than $200 million in investor funds, while Quiros alone was also accused of having pocketed more than $55 million of additional funds for his own personal use, including to buy two luxury New York City condos. Stenger, who is cooperating with authorities, has reached a recent settlement with the SEC, but that settlement does not protect him from possible civil penalties, nor from possible criminal charges being brought, it lays out.

Quiros is not expected to be offered a deal, court documents show. His case is headed for trial in federal court in Miami, where he resides, next fall, according to the record in the case.

Quiros is seeking to use the proceeds from his Setai condo in New York, according to a motion filed in court this week in advance of a hearing on the matter today, Friday. The proceeds from him mortgaging that condo are not part of the receivership assets, the motion states.

SEC attorneys as well as the federal receiver, Goldberg, have argued in the two earlier attempts to have Quiros’s legal counsel paid that the funds they would be paid with come from dirty deals, essentially, and that Quiros would be essentially permitted to use allegedly stolen investor funds to now defend himself. His attorneys have argued the condo in question was not purchased with allegedly tainted investor funds, however.

This week’s motion by Quiros’s legal team details nine areas in which the defense team have worked, including the motion to dismiss the receiver’s action; a reply seeking to have the SEC case dismissed; a reply seeking to also have the Vermont action dismissed from court; work on a class action suit brought by investors who were allegedly defrauded; other legal cases in Florida and Vermont connected with the complex case against Quiros; the mortgaging of the Setai Condominium, and more.

When the Setai condo was mortgaged, the receiver was sent more than $1 million from the transaction, this week’s motion states.

Since the court earlier had authorized those funds could be used for Quiros to pay his legal bills, that is the request now of Quiros’s team - to have those funds used for legal bills.

Scott Cosgrove, the attorney for Quiros who wrote the motion, noted that both the SEC and the receiver oppose the motion.

Of Friday’s hearing on the third motion to allow him access to the funds to begin to pay his attorneys, Cosgrove writes on behalf of his client, “Mr. Quiros expects that the SEC and the Receiver may try to raise the same arguments in response to his third motion for attorneys’ fees. Re-litigating these overarching issues on each fees motion is not productive, nor efficient.”

“Mr. Quiros thus welcomes the Oct. 7 hearing as an opportunity for the Court to establish a procedure for Mr. Quiros to submit for approval his invoices (and, if desired, a description of the work performed), consistent with the May 27 order,” writes Cosgrove.