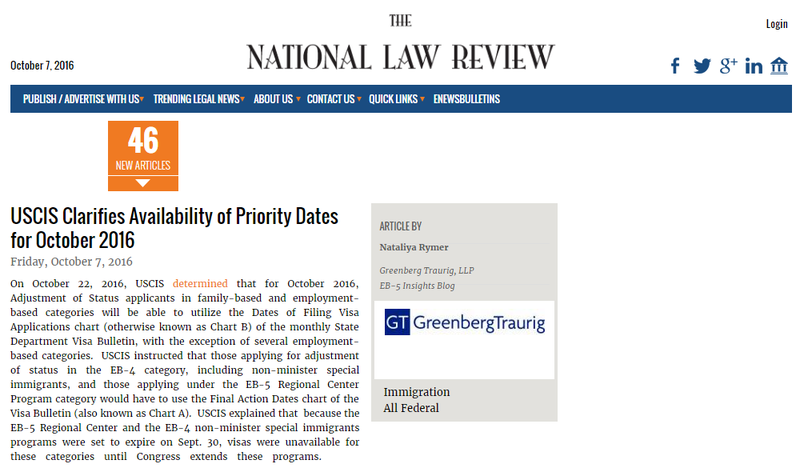 On October 22, 2016, USCIS determined that for October 2016, Adjustment of Status applicants in family-based and employment-based categories will be able to utilize the Dates of Filing Visa Applications chart (otherwise known as Chart B) of the monthly State Department Visa Bulletin, with the exception of several employment-based categories.  USCIS instructed that those applying for adjustment of status in the EB-4 category, including non-minister special immigrants, and those applying under the EB-5 Regional Center Program category would have to use the Final Action Dates chart of the Visa Bulletin (also known as Chart A).  USCIS explained that  because the EB-5 Regional Center and the EB-4 non-minister special immigrants programs were set to expire on Sept. 30, visas were unavailable for these categories until Congress extends these programs.  The announcement further stated that upon the programs’ extension, USCIS would make appropriate updates to the Visa Bulletin as well as to the webpages that provide information regarding adjustment of status eligibility.

On Sept. 28, 2016, Congress approved a short-term federal spending legislation that included an extension for the EB-4 and the EB-5 Regional Center programs through Dec. 9, 2016, with no changes to program policy.  While USCIS has since updated the program pages to reflect that visas are indeed available in these categories, the Agency has still not allowed the use of Chart B in application for adjustment of status for those applying in the EB-5 category.  Further, it has instructed that all applicants in the EB-5 category (including Regional Center and non-Regional Center programs) must use Chart A.  For those approved EB-5 investors born in mainland China, only those with priority dates on or before Feb. 21, 2014, may apply for adjustment of status during the month of October.