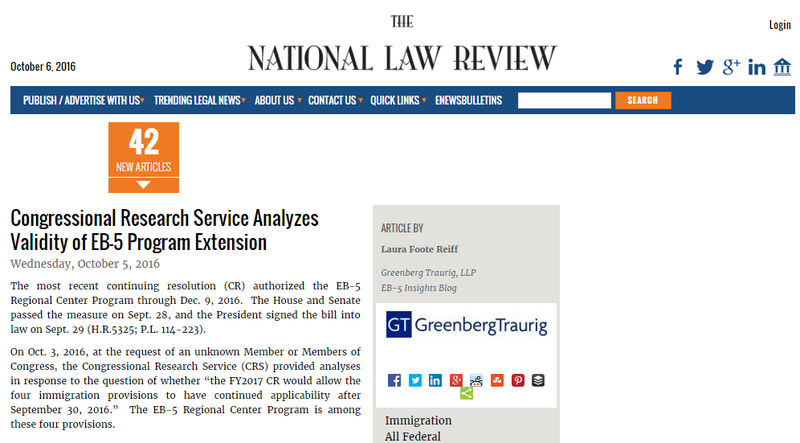 On Oct. 3, 2016, at the request of an unknown Member or Members of Congress, the Congressional Research Service (CRS) provided analyses in response to the question of whether “the FY2017 CR would allow the four immigration provisions to have continued applicability after September 30, 2016.”  The EB-5 Regional Center Program is among these four provisions.

CRS is a research office within the legislative branch that provides legal analyses to the House and Senate on a confidential basis.  The CRS website describes its function as follows:

The reports and analyses produced by CRS are not made public by the office, though many do surface in the public domain.  In its letter, CRS makes no firm conclusion as to the way in which the CR’s operative language should be interpreted with respect to the EB-5 program.  Rather, the letter highlights the fact that section 101 of the CR could be read broadly or narrowly, with different results and points out that in its view, there is some ambiguity in the way the law was drafted.

Despite CRS’ view of the CR and its language relative to the EB-5 program, we are confident that Congress successfully extended the program and intended to do so.  U.S. Citizenship and Immigration Services (USCIS) as well as the United States Office of Management and Budget (OMB) interpret the language as validly extending the program.

Prior to enactment of the CR, OMB explained to congressional staff that it would interpret the CR language as automatically continuing the four immigration programs for the term of the FY17 CR. OMB noted that if the current CR’s section 101 was similar to the prior CR’s section 101, the Administration would interpret the expiration dates in the four immigration programs as automatically extended through the period of the CR.  Note that section 101 in H.R.5325 did indeed have a “similar construction” to the prior CR.  We have reprinted them below for comparison:

Furthermore, when congressional staff inquired with DHS/USCIS about its interpretation of the language prior to its enactment, USCIS communicated to Senate staff that agency counsel had the same view as OMB with respect to the CR’s language. DHS/USCIS staff confirmed again today that the position of the Administration is that the EB-5 Regional Center Program, along with the 3 other immigration programs that were going to sunset at the end of September 2016 has been extended in the CR based upon the language included by the Congress.

While the CRS letter may serve to muddy the waters with respect to the current EB-5 authorization, unless OMB or DHS accede to one of CRS’ alternative views, the letter will have no impact on the way the agency operates the program.  We have no indication from OMB or the USCIS that either believes the EB-5 program was not extended by H.R.5325.  Until either agency makes public any different interpretation of the current CR language, EB-5 stakeholders should be confident that the program has been successfully reauthorized through Dec. 9, 2016.