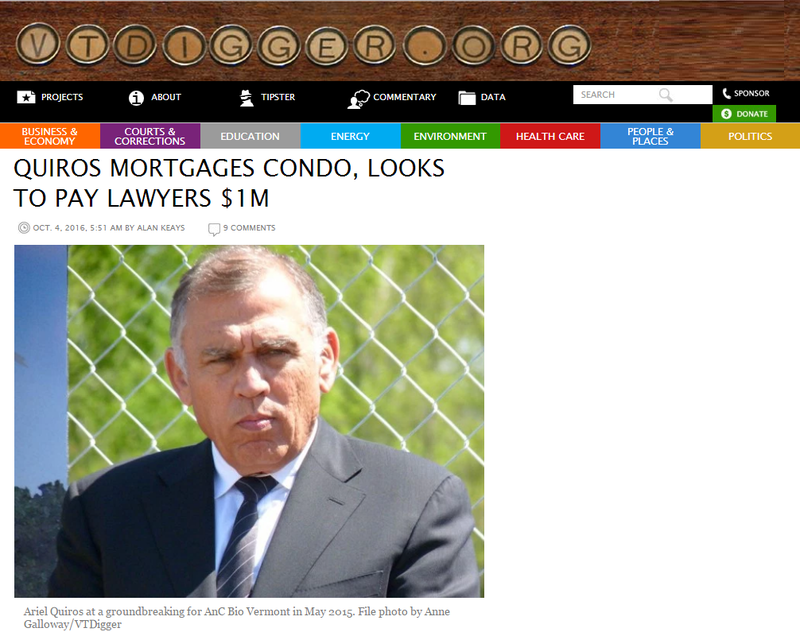 Ariel Quiros’ legal bills are mounting, prompting him to mortgage his New York City condo and ask a federal judge to allow the use of those funds to help pay his attorneys who are owed more than $1 million.

“Mr. Quiros’s attorneys have not yet been paid for any of the work they performed in April, May, June, July, or August 2016,” Scott Cosgrove, a lawyer for Quiros, wrote in a motion filed this week in a federal case alleging his client committed investor fraud in a series of Vermont projects.

In May, federal Judge Darrin Gayles approved Quiros getting $15,000 in monthly expenses, paid by the Jay Peak receivership. Also, Qurios was allowed to sell or mortgage the condo to cover “reasonable” legal fees and living expenses.

In August, Cosgrove wrote in this week’s motion, Quiros completed the mortgage of the condominium, and wired more than $1 million from the transaction to the receiver appointed by the federal judge to oversee the properties at the center of the fraud allegations.

Quiros is now asking the judge to allow him to use those funds to pay his legal bills.

Attorneys in the federal lawsuit for the U.S. Securities and Exchange Commission have previously opposed Quiros using funds from the condo’s sale or mortgage going to help pay for his defense team, arguing the luxury residence was purchased with proceeds from the alleged fraud.

A hearing in the case to take up the matter of Quiros’ legal fees is set for Friday in U.S. District Court in South Florida. That hearing was set well before Quiros’ latest filing and it’s unclear if the matter of using the condo funds to pay the legal fees will be taken up.

The legal bills have been piling up for Quiros, a Miami businessman and owner of Q Resorts, a holding company that includes Jay Peak, since April.

That’s when state and federal lawsuits were filed against him and Bill Stenger, former CEO and president of Jay Peak, alleging the two men misused $200 million in EB-5 immigrant investor funds raised for projects in the Northeast Kingdom, including hotels and a biomedical center.

The state and federal lawsuits lay out the largest alleged fraud case in the history of the EB-5 program.

Since the filings in April other legal trouble followed, with Quiros named as a defendant in other class-action lawsuits involving investors. Another case naming him as a defendant and filed earlier this year in Vermont by two Chinese investors was dismissed last week.

In a July motion, Quiros’ lawyers wrote that legal bills had totaled $640,520 through June 30, including $573,589 to the firm of his lead counsel, Mitchell Silberberg & Knupp LLP, which has offices in New York City, Los Angeles and Washington, D.C.

This week, in the motion dealing with the mortgage on the condo, his attorneys wrote that an additional $574,610 in legal expenses has been racked up, including $497,242 for his lead counsel’s firm for work from July 1 through Aug. 31.

His legal team, court filings state, have been busy tracking pleadings in the complex, multi-jurisdictional case, as well as submitting motions, conducting research and analyzing documents, with the law firm serving as lead counsel in almost daily communication with Quiros.

Those rates, the filings state, are comparable to “competitor” firms, both nationally and in the Miami area.

SEC attorneys have argued that the attorney rates are too high and Quiros should not be given fees for work done on cases other than for the one filed by federal regulators.

Federal regulators began investigating the Jay Peak developers in 2013. In May 2014, they deposed Quiros who declared he was a “genius” because of the way he leveraged investor funds with margin loans.

Stenger has settled his case with the SEC, agreeing to cooperate with investigators. He still faces the possibility of a monetary penalty, depending on his level of cooperation and ability to pay.