Scott Milne's Statement On Leahy's Vote To Shut Down The Government 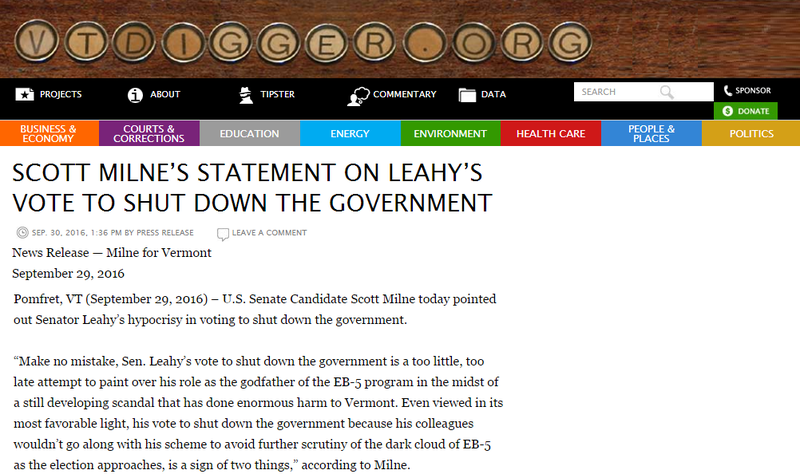 “Make no mistake, Sen. Leahy’s vote to shut down the government is a too little, too late attempt to paint over his role as the godfather of the EB-5 program in the midst of a still developing scandal that has done enormous harm to Vermont. Even viewed in its most favorable light, his vote to shut down the government because his colleagues wouldn’t go along with his scheme to avoid further scrutiny of the dark cloud of EB-5 as the election approaches, is a sign of two things,” according to Milne.

“First, Pat Leahy’s words don’t match his actions. When others have used a vote to shut down the government when they don’t get their way, he has said things like: ‘I share the frustration of most Americans that what was once the regular business of Congress – simply funding the government – has been replaced by political theater and another artificial, made-in-Congress crisis’,

“Second, this vote illustrates just how naïve Patrick Leahy believes we Vermonters are. After 42 years in Washington he asks us to believe that big special interests donate millions to his re-election campaigns, cycle after cycle, and don’t get anything out of it. Now, he builds his re-election efforts on the ground that Vermont needs his seniority in the Senate. Under the pressure of the looming election, he has made having EB-5 scrutiny go away a priority. And yet, he failed.” Milne concluded.