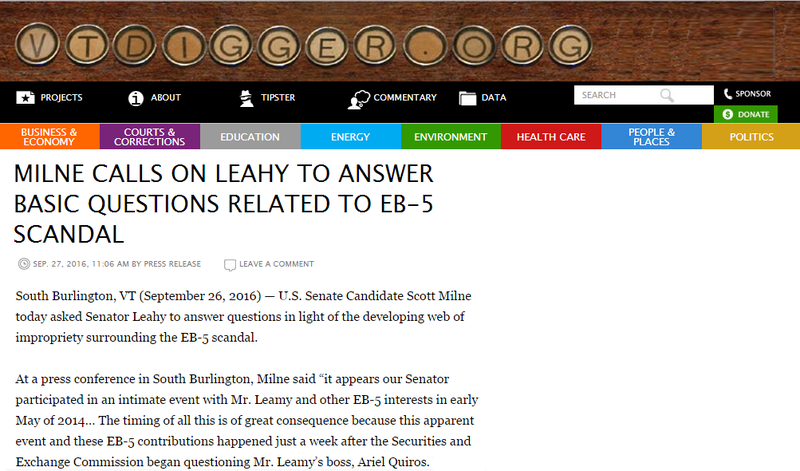 At a press conference in South Burlington, Milne said “it appears our Senator participated in an intimate event with Mr. Leamy and other EB-5 interests in early May of 2014… The timing of all this is of great consequence because this apparent event and these EB-5 contributions happened just a week after the Securities and Exchange Commission began questioning Mr. Leamy’s boss, Ariel Quiros. Within a couple of weeks, both Bill Stenger and Quiros would be deposed by the SEC. These revelations come after we learn that Senator Leahy’s daughter was hired to lobby Congress on behalf of Hollywood, which is a strong supporter of EB-5. Hollywood has donated hundreds of thousands of dollars to curry favor with Leahy in just this election cycle. And, Pat Leahy supports a number of their key priorities, including having guided EB-5’s reauthorization in 2012.

“This whole affair has more loose ends than a bowl of spaghetti, and Senator Leahy alone can bring clarity by doing nothing more than what he has for decades demanded of others: open up your records to public scrutiny and answer legitimate questions. I ask Pat Leahy:

Why, despite portraying yourself as an advocate for transparency, including increased transparency for Congress, will you not voluntarily provide the EB-5 records, and the other records that have been repeatedly requested?

Where did your fundraising events in early May of 2014 take place, and who was in attendance?

When did you first obtain information that the investments in the Jay, Burke, and Newport projects may not be sound?

Why did you discredit the Department of Homeland Security Inspector General’s investigation into Alejandro Mayorkas’s management of EB-5 projects in Southern California?

Given your pledge to return Jay Peak related contributions, why will you not also return contributions from other corporate wrongdoers such as Mylan and Wells Fargo? This lack of consistency leads people to believe you are returning Jay Peak contributions simply to shut down questioning about the EB-5 scandal.”