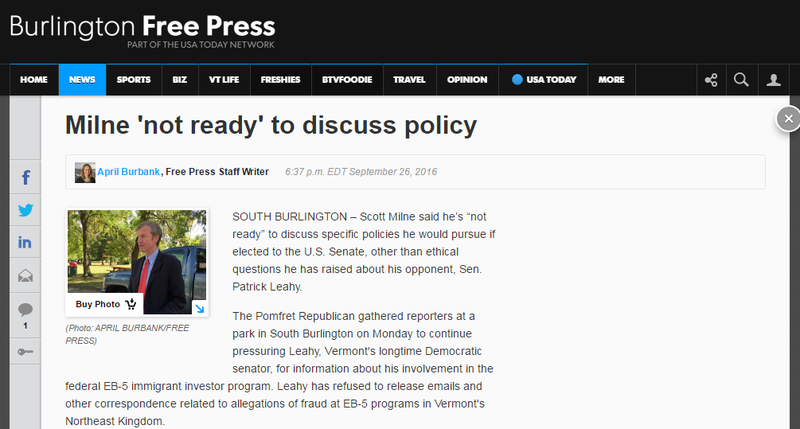 Scott Milne said he’s “not ready” to discuss specific policies he would pursue if elected to the U.S. Senate, other than ethical questions he has raised about his opponent, Sen. Patrick Leahy.

The Pomfret Republican gathered reporters at a park in South Burlington on Monday to continue pressuring Leahy, Vermont's longtime Democratic senator, for information about his involvement in the federal EB-5 immigrant investor program. Leahy has refused to release emails and other correspondence related to allegations of fraud at EB-5 programs in Vermont's Northeast Kingdom.

“This whole affair has more loose ends than a bowl of spaghetti,” Milne said.

Milne went on to spend a significant portion of the news conference explaining why he lacked his own proposals for reforming the EB-5 program or other policy areas.

“I announced my campaign 16 days ago,” Milne said, adding later, “We’re 16 days into it. We’ve got 44 days to go. And I’m not ready to talk about specific proposals.”

Milne has been a candidate since May. He hosted a formal campaign kickoff Sept. 10.

Milne's campaign to date has focused on a handful of ethics and transparency commitments, which he says would set him apart from "career politicians." He has called for an expansion of the federal Freedom of Information Act to include members of Congress, as well as term limits for members of Congress.

None of these proposals is described on Milne's campaign website. Leahy’s campaign has criticized Milne's lack of policy positions.

“Mr. Milne seeks to represent Vermonters while refusing to tell them what exactly it is he represents,” Leahy spokesman Jay Tilton said in a statement Monday. “Vermonters expect and deserve better.”

When pressed for policies Monday, Milne said he would be “more effective” than Leahy on the issue of climate change and said he would also work on economic justice and criminal justice reform.

When asked whether he would support Republican presidential nominee Donald Trump, Milne said he needed more time to reach a decision.

After months of arguing through the news media, Milne and Leahy are expected to hash out their differences in three debates later this fall.