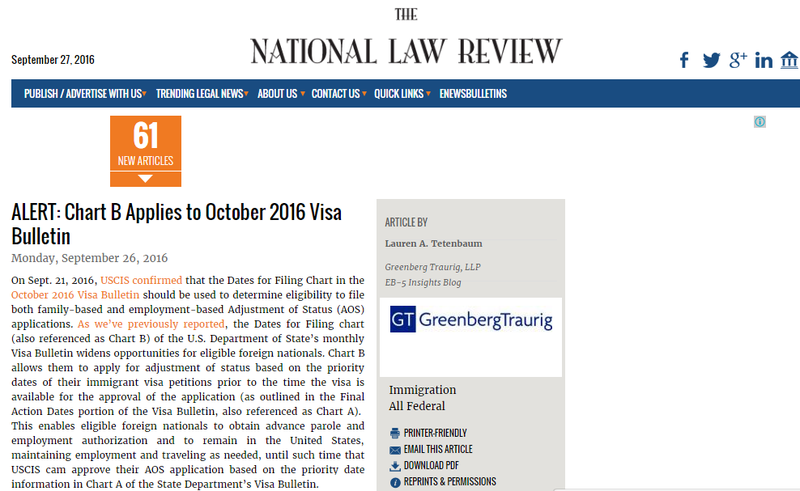 On Sept. 21, 2016, USCIS confirmed that the Dates for Filing Chart in the October 2016 Visa Bulletin should be used to determine eligibility to file both family-based and employment-based Adjustment of Status (AOS) applications. As we’ve previously reported, the Dates for Filing chart (also referenced as Chart B) of the U.S. Department of State’s monthly Visa Bulletin widens opportunities for eligible foreign nationals. Chart B allows them to apply for adjustment of status based on the priority dates of their immigrant visa petitions prior to the time the visa is available for the approval of the application (as outlined in the Final Action Dates portion of the Visa Bulletin, also referenced as Chart A).  This enables eligible foreign nationals to obtain advance parole and employment authorization and to remain in the United States, maintaining employment and traveling as needed, until such time that USCIS cam approve their AOS application based on the priority date information in Chart A of the State Department’s Visa Bulletin. “Eligible foreign nationals” include those here in lawful nonimmigrant visa status such as F-1, H-1B, L-1, and others.  Importantly, the availability of Chart B is determined on a monthly basis and announced by USCIS on its website.

The announcement is significant for certain foreign nationals in valid nonimmigrant status in the United States who have approved I-526 petitions. In determining eligibility to apply for AOS, applicants should note the priority date on their I-526 approval notice.  Based on Chart B of the October 2016 Visa Bulletin, those applicants whose priority date is current (“C”),  or, in the case of mainland-China born immigrant investors, is a date prior to June 15, 2014, can file AOS applications in October 2016. Importantly for mainland-China born immigrant investors, per Chart A of the October 2016 Visa Bulletin, only those whose priority dates prior to Feb. 22, 2014 can expect their AOS applications to be adjudicated as of Oct. 1, 2016. Note that Chart A currently reflects “U” or “unauthorized” for mainland-China-born EB-5 applicants in the EB-5 Regional Center Pilot Program category, which is currently set to expire Sept. 30, 2016. However, as we reported earlier, we expect Senate to vote on a short-term EB-5 program extension soon.

USCIS announced that it will update the chart and begin accepting and adjudicating the AOS cases for those immigrant investors whose petitions were filed in the EB-5 Regional Center Pilot Program category upon the approval of the extension of the program by Congress. Foreign nationals who are eligible to file for AOS next month based on these current eligibility rules should contact an immigration attorney as soon as possible to ensure that their AOS applications are prepared and filed timely.