Leahy Says EB-5 Is 'Mired In Fraud And Abuse,' Renews Calls For Reform 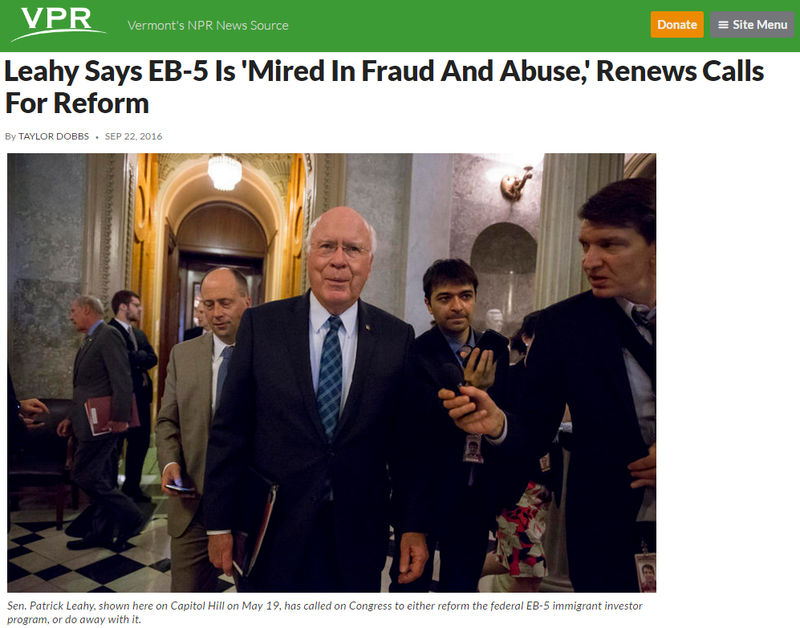 In a floor speech in the U.S. Senate Thursday, Sen. Patrick Leahy called on Congress to either reform the EB-5 immigrant investor program or do away with it all together.

The program is set to expire this month, and Leahy says it shouldn’t be extended unless reforms are made to prevent fraud and “gerrymandering.”

“If this flawed program is not reformed, I believe it should end,” Leahy said. “I can no longer support a straight extension of the program.”

Vermont’s senior senator has supported EB-5 in the past, but he said Thursday that it has since become “mired in fraud and abuse.”

The EB-5 program is designed to allow immigrants to gain legal residency status in the United States if they make a job-creating investment of at least $500,000 in an economically troubled area.

“The very reason I supported this program have been rendered meaningless,” Leahy said. “The program has become an unintended boon for the wealthiest business districts in the country. Affluent areas now dominate the program. They exploit incentives that were intended for underserved areas, a practice that Department of Homeland Security Secretary [Jeh] Johnson has rightly described as gerrymandering.”

Leahy pointed out another problem with the EB-5 program that, for him, is closer to home.

“In recent years, EB-5 has become riddled with fraud. Review after review conducted by the [Government Accountability Office], the inspector general, and by Senator Grassley and I on the Judiciary Committee, we’ve revealed serious vulnerabilities in the program,” he said. “Investors have been defrauded. They’ve lost money. Immigration benefits have been put in jeopardy, and communities that once hoped to benefit from this program have been left to pick up the pieces.”

Earlier this year, the Securities and Exchange Commission (SEC) alleged that Jay Peak CEO Bill Stenger and owner Ariel Quiros engaged in major fraud, including hundreds of millions of dollars of investor money being misappropriated and used for expenses totally unrelated to the projects investors thought they were funding. The SEC alleged that Quiros bought a $2.2 million condo in Trump Place in New York City with investor money.

Stenger has since agreed to a settlement with the SEC.

Leahy has been pushing for reforms to EB-5 for years. Soon after the Jay Peak fraud allegations were made public, Leahy reiterated his call for reforms of the program and said he felt “betrayed” by Stenger and Quiros.

Clarification 12:46 p.m. This story was edited to reflect that Leahy has been in favor of EB-5 reform since before this year's fraud allegations at Jay Peak.