Leahy: Reform EB-5 or end it 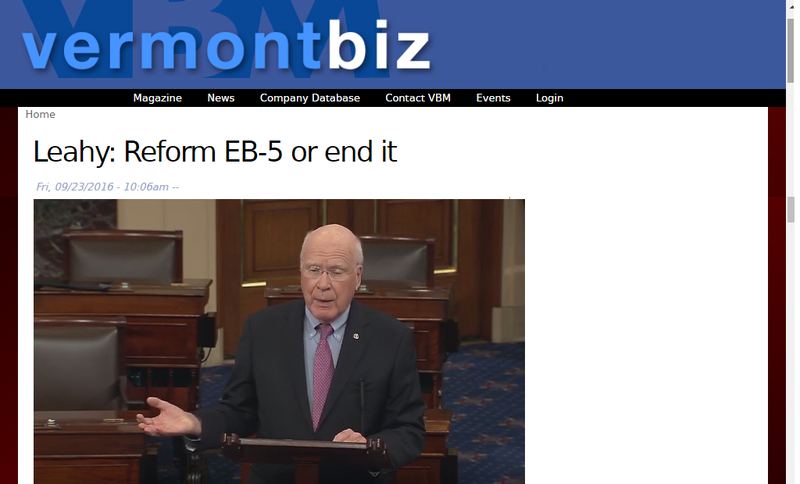 Senator Patrick Leahy (D-Vermont) and Senator Charles Grassley (R-Iowa) spoke back-to-back on the Senate Floor Thursday morning, as the EB-5 reform issue goes down to the wire.  The program’s authorization expires on September 30.  Some in Congress are pushing for a simple extension of the program. Leahy and Grassley are insisting on reforms, if the program is to go forward at all. Leahy originally had been a major supporter and architect of the foreign investor program going back to the 1990s. But alleged fraud cases in Vermont and elsewhere and the gerrymandering of EB-5 zones has led him to be a reformer of the program. EB-5 zones are intended for poorer parts of the country, but are now turning up in Manhattan and Miami Beach. In their tandem remarks on the Senate Floor, the senators said they will not support a simple extension of EB-5 without reform. Leahy has made this clear many times earlier this year.  Leahy Thursday went further to say that he will oppose the forthcoming CR (the stop-gap government funding bill that’s the last big must-pass bill of this session…which ends in just a few days) if it includes a simple extension and not the reforms that Leahy, Grassley and their House allies have been pressing for.

Grassley is the chairman of the Judiciary Committee, and Leahy is the Ranking Member. For years Leahy and Grassley have been pushing for EB-5 reforms on which they have held hearings introduced reform legislation.

I come to the floor today, joined by Senator Grassley, to share my concerns about the EB-5 Regional Center program. This program’s authorization is set to expire at the end of the month, but Senate leadership wants to extend the EB-5 program as part of the continuing resolution. If this flawed program is not reformed, I believe it should end. I can no longer support a straight extension of this program.

For years, I strongly supported the EB-5 program. I even championed its reauthorization. I did so because EB-5 was designed to bring investment and jobs to underserved rural and urban communities. And for some time, that is what it did. In my home State of Vermont, communities like Warren and Vergennes used EB-5 to create and save jobs during difficult economic times. They are EB-5 success stories.

But that is the EB-5 of yesterday. The EB-5 program of today is mired in fraud and abuse. It has strayed from its important policy goals. The incentives that Congress created to direct investment to underserved areas—the very reason why I supported this program—have been rendered meaningless. The program has become an unintended boon for the wealthiest business districts in the country. Affluent areas now dominate the program by exploiting incentives intended for underserved areas, a practice Department of Homeland Security Secretary Johnson has rightly described as gerrymandering. It has gotten to a point where a luxury hotel in Beverly Hills qualifies as a distressed urban area. Only in the world of EB-5 is Beverly Hills considered economically distressed.

This type of abuse is not the exception—it is the rule. Currently, 90 percent of EB-5 capital goes to areas that rely on gerrymandering to qualify as distressed. Ninety percent. That is why the civil rights community, led by The Leadership Conference on Civil and Human Rights, has so strongly criticized this program. Far from being a tool for economic development and job creation, EB-5 now serves as a corporate subsidy for wealthy developers, allowing them to save tens of millions of dollars on financing. It is no wonder these developers fight so hard against reforms that would restore incentives to invest in rural and poor urban areas.

I am not suggesting affluent areas should never qualify for EB-5 financing. I am merely suggesting that they should not qualify for the unique incentives that Congress intended for underserved communities that have more trouble attracting capital.

Unfortunately, gerrymandering and abused incentives are only part of the problem. In recent years EB-5 has become riddled with fraud. Review after review— conducted by the GAO, the Inspector General, and our Judiciary Committee—have revealed serious vulnerabilities in the program. Investors have been defrauded; they have lost money and their immigration benefits have been put in jeopardy. And communities that once hoped to benefit from this program have been left to pick up the pieces.

From California to Florida, and from Texas to even my home State of Vermont, allegations of fraud have stained this program. Since 2013, the Securities and Exchange Commission has filed dozens of EB-5 related enforcement actions. As of last year, over 50 more Federal investigations were ongoing. Fraud will continue unabated until we give the Department of Homeland Security the tools it needs to guard against abuse.

We have an obligation in Congress to ensure that our Federal agencies are able to do their jobs. The Department of Homeland Security has made some administrative improvements to EB-5, but Secretary Johnson has made it clear to both me and Senator Grassley that congressional action is necessary.

For five years I have worked across the aisle to reform EB-5. In 2013, I included EB-5 reforms in the Senate-passed Comprehensive Immigration Reform. But the House of Representatives failed to allow a vote on those reforms. Since then, I have worked with Senator Grassley to review and reform the EB-5 program. Last year, he and I negotiated far-reaching reforms with our counterparts in the House Judiciary Committee. We pushed to have that “four corners” agreement included in the omnibus appropriations bill at the end of last year. But big city developers still viewed our reforms as a threat to their bottom line. They worked aggressively to block our efforts. Unfortunately, leaders in Congress sided with the developers and extended the EB-5 program without reform. Senator Grassley and I will not relent in our efforts to reform this program. At the very beginning of the New Year, we worked together to continue a series of public hearings and to keep pushing for reform.

We are united in our belief that it is unacceptable that Congress has failed to respond to an overwhelming consensus for reform. A full revamping of the program is required. A Band-Aid is not good enough. Powerful corporate interests must not be allowed to derail improvements that can guard against fraud, protect investors, and help our most distressed communities. Powerful developers want only window-dressing reform proposals that do little to change the status quo. And we cannot accept so-called reforms that the SEC believes would, in fact, leave holes in enforcement efforts.

Senator Grassley and I, along with our counterparts on the House Judiciary Committee, have put forward meaningful reforms. These reforms were developed in consultation with the Department of Homeland Security and the SEC. They are tailored to prevent the rampant fraud we are seeing today, and they are necessary to save EB-5 from itself.

As the American people learn more about how the EB-5 program is being abused, the louder the calls will be for its reform, or even its termination. I believe we can still fix EB-5. But I cannot support simply extending it, yet again. While I do not come to this decision lightly, I cannot support a continuing resolution that leaves these flaws in place. The time has come to reform EB-5, or to end it.