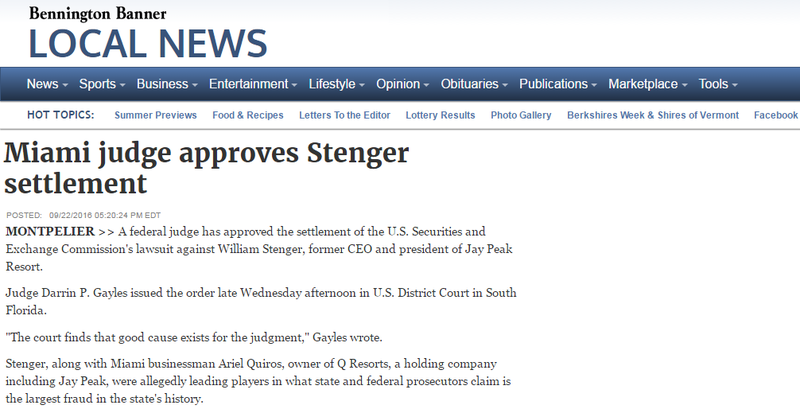 A federal judge has approved the settlement of the U.S. Securities and Exchange Commission's lawsuit against William Stenger, former CEO and president of Jay Peak Resort.

"The court finds that good cause exists for the judgment," Gayles wrote.

Stenger, along with Miami businessman Ariel Quiros, owner of Q Resorts, a holding company including Jay Peak, were allegedly leading players in what state and federal prosecutors claim is the largest fraud in the state's history.

Both men were accused in state and federal lawsuits filed in April of misusing $200 million in federal EB-5 investor funding through a Ponzi-like scheme involving a series of development projects in the Northeast Kingdom.

Stenger's settlement resolves the federal case against him. The state lawsuit remains pending. Quiros is challenging both lawsuits.

Stenger's settlement does not prevent the possibility of criminal charges from state or federal prosecutors in the future.

Stenger agreed to the terms of the settlement earlier this month. At that time he said would no longer talk to the press.

"I ask that you please respect that I will not be making any more public statements about the settlement nor about the case," he wrote in a statement sent to several media outlets at that time.

Under the settlement, Stenger is not admitting or denying the allegations, which ranged from diverting funds from one project to use for another, misstating revenue projections and failing to make required contributions to developments.

However, he is giving up his rights to appeal and is barred from participating in the EB-5 program.

Foreign investors in the program put up at least $500,000, plus a $50,000 administrative fee, and if 10 jobs are created, the person is eligible for permanent U.S. residency.

Stenger also agreed in the settlement to cooperate with investigators. He may still face a monetary penalty based on his level of cooperation and ability to pay.

A day after the agreement was announced earlier this month, Michael Goldberg, the court-appointed receiver overseeing the Jay Peak properties, announced that Stenger would no longer be working at the resort.