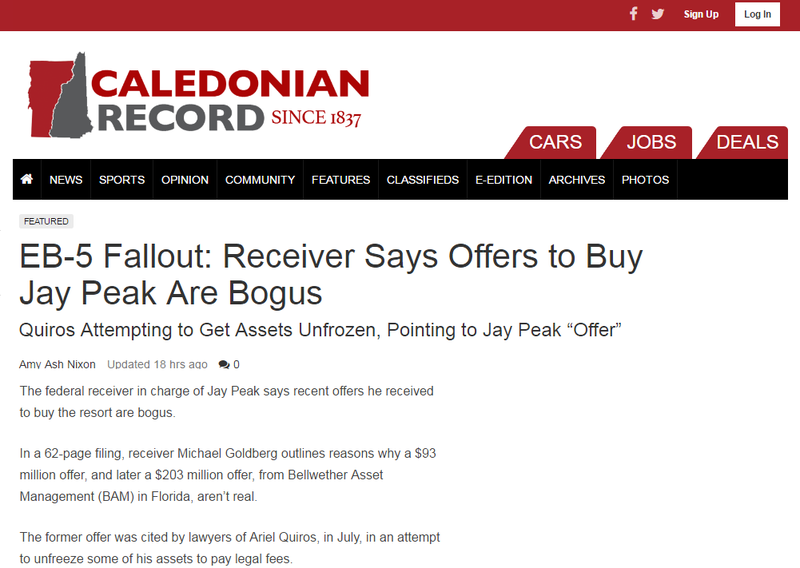 The federal receiver in charge of Jay Peak says recent offers he received to buy the resort are bogus.

The former offer was cited by lawyers of Ariel Quiros, in July, in an attempt to unfreeze some of his assets to pay legal fees.

“Quiros’ counsel places great weight on this unsigned offer stating that it proves ‘there are more than enough assets available to satisfy any judgment against Mr. Quiros, and thus there is no logical reason why he should not be able to access his own assets to defend himself,’ ” notes Goldberg.

But, the receiver says, the offer doesn’t pass the sniff test. For starters, Goldberg explains, “the person behind the offer {is} currently being sued for securities fraud and common law fraud in the United States District Court for the Southern Florida District accused of stealing $3 million.”

Goldberg also notes the proposed buyer, Jean Joseph, “never visited the property, never conducted any due diligence and did not hire a lawyer prior to blinding submitting its original letter of intent.”

The “offer,” Goldberg stated, has “created a great deal of misinformation and confusion among investors, creditors and the press and the Receiver has been forced to incur significant time responding to investor and creditor inquiries concerning the validity of the Letter of Intent.”

Goldberg tells the court he thinks “the sole reason Quiros filed (the offer letter) with the Court was to attempt to gain a litigation advantage.”

“Certainly, any first year lawyer would know not to structure a deal to purchase the stock of entities which are defendants in an SEC receivership potentially subjecting their client to hundreds of millions of dollars in claims.”

In July a representative of Bellwether visited Jay Peak and filed a second unsigned letter of intent to purchase. Again, Goldberg notes, it did not include the assets the offer intended to purchase or other basic details.

“The asset list is completely nonsensical,” wrote Goldberg. “For instance, it lists specific rooms in buildings such as the ‘Valhalla board room’ which is a single conference room inside the hotel. This is the equivalent of offering to buy Courtroom 11-1 in the Federal Courthouse, without buying the entire building. Even more bizarre, included on the asset list is ‘Disney pixar toy story (sic)’.”

The Receiver has no idea, he writes, what that is supposed to mean, and said the offer is impossible to evaluate. He said he has never seen anything like it in 25 years in his work.

Later, Goldberg said, a third Letter of Intent came in, and “it too is entirely suspect.” This offer upped the original $93 million to invest a total of $203 million. He said that offer is also completely illegitimate.

Goldberg performed what he called a “basic investigation” into Joseph, and found “extremely troublesome” information about him. He is “accused of promising to secure a $30 million loan for a group of investors in Brazil who were seeking the loan to construct a hotel in Brazil. As a pre-condition for the loan, Joseph required the Brazilian investors to invest $3 million in another business he allegedly controlled… Joseph allegedly absconded with their $3 million without obtaining the promised financing.”

Goldberg then wrote to Joseph asking how he intended to complete the transaction; about his experience with EB-5 projects; with vacation clubs and more; and if he had ever been accused of violating any securities laws or accused of fraud.

He asked a second time if anyone involved with BAM had ever been accused of securities violations or fraud.

“On Sept. 14, the Receiver received a craftily worded letter from a gentleman named Henry W. Johnson, a man now purporting to be a director of the Bellwether Business Group whom the Receiver had never previously communicated with, stating, ‘let me stress that no one within Bellwether Business Group, whether Shareholder or Director, is involved in any violation of federal or state securities laws or subpoena for fraud,’” Goldberg explains.

An email with the letter instructed Goldberg not to communicate with Joseph any longer, “despite the fact that Joseph was previously listed as the Director of BBG and the Manager of BAM and the only person the Receiver had ever dealt with on their behalf,” Goldberg writes. The Receiver says he learned more about Joseph, which he said is not appropriate to publish in the report.

“Thus, we are now full circle to the Reply where Quiros states ‘(f)or reasons that are unclear, the Receiver has not disclosed to the Court the offer to purchase Jay Peak, Inc., for $93 million…’ The Receiver submits that the answer to Quiros’ concerns should now be crystal clear, and if anyone’s argument is undercut, it is Quiros’ argument,” concludes Goldberg.