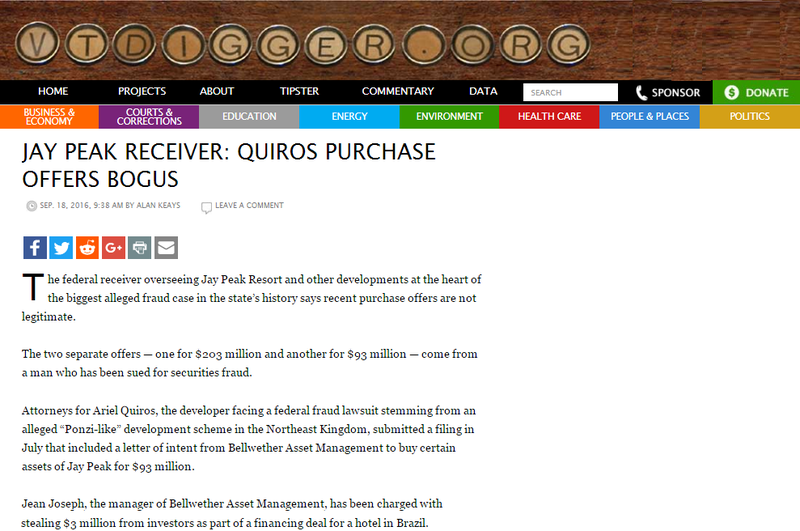 The federal receiver overseeing Jay Peak Resort and other developments at the heart of the biggest alleged fraud case in the state’s history says recent purchase offers are not legitimate.

The two separate offers — one for $203 million and another for $93 million — come from a man who has been sued for securities fraud.

Attorneys for Ariel Quiros, the developer facing a federal fraud lawsuit stemming from an alleged “Ponzi-like” development scheme in the Northeast Kingdom, submitted a filing in July that included a letter of intent from Bellwether Asset Management to buy certain assets of Jay Peak for $93 million.

Jean Joseph, the manager of Bellwether Asset Management, has been charged with stealing $3 million from investors as part of a financing deal for a hotel in Brazil.

In August, Bellwether sent a letter of intent to Michael Goldberg, the court appointed receiver, offering $203 million for the Jay Peak assets held by the receivership.

That offer, though higher in value, is actually a worse deal than the earlier one, Goldberg wrote in a filing with the U.S. Federal Court for the Southern District of Florida. The Jay Peak properties are in receivership, and a federal judge would have to approve any sale. 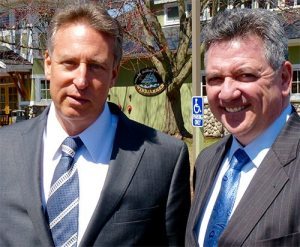 Attorney Michael Goldberg(left), is the court-appointed receiver in the Jay Peak EB-5 fraud case. Jeffrey Schneider is an attorney Goldberg brought in to help him with the case.

The offers appeared to be put together by someone not familiar with such deals, Goldberg wrote, adding, “the proposed transaction was structured, in part, as a stock sale whereby BAM intended on purchasing the stock of the very entities in receivership potentially subjecting the buyer to hundreds of millions of dollars in claims — something the Receiver has never seen in 25 years of serving as a receiver.”

The $203 million August offer would earmark most of the money from the sale of Jay Peak for various purposes, he said, such as restarting a proposal to build a biomedical center in Newport.

The previous $93 million offer did not have strings attached and would have allowed investors to recoup losses. In that offer, Goldberg says the buyer listed assets to purchase that were “nonsensical” and “bizarre.”

“Included on the asset list is ‘Disney pixar toy story’ [sic],” Goldberg wrote in a late Friday afternoon filing. “The Receiver has no idea what BAM (Bellwether Asset Management) is referring to as the Receivership Entities have no interest in this Disney movie and can only assume that this, too, is a carryover from another transaction.”

Neither offer is serious, Goldberg wrote.

When news of the $93 million offer first surfaced last month, Goldberg said it was “unsolicited.”

“The property is not being sold to Belllwether,” Goldberg said in August. “We’re not even selling it at this point.”

Quiros’ attorneys have argued in court motions that he should be able to sell assets in order to raise money to defend himself. They argued in court last May that Quiros didn’t have enough money to “buy a cup of coffee” since the value of the assets involved in the case are worth more than enough to satisfy any judgment against him.

“Typical of Quiros, he neglects to inform the Court of the entire story behind the BAM (Letter of Intent) including the important fact that the proposed buyer never visited the property, never conducted any due diligence and did not hire a lawyer prior to blindly submitting its original letter of intent,” Goldberg wrote.

“Moreover, had Quiros bothered to undertake even the slightest due diligence, he would have learned that the person behind the offer was currently being sued for securities fraud and common law fraud in the United States District Court for the Southern District of Florida accused of stealing $3 million.”

“What the receiver learned was extremely troublesome,” Goldberg wrote.

In a lawsuit, also pending in federal court in Florida, Joseph is accused of promising to secure a $30 million loan for a group of investors seeking to build a hotel in Brazil, Goldberg’s filing states.

As a “precondition” for the loan, Joseph required the Brazilian investors to put $3 million in another business he allegedly controlled.

After the investors forwarded the money, Goldberg wrote, Joseph allegedly “absconded” with the $3 million and never obtained the hotel financing for the investors, who then filed the lawsuit.

A judgment of default was entered against Joseph earlier this month, the filing stated.

“Clearly, Joseph is not someone that the Receiver feels comfortable doing business with and BAM’s various proposals are suspect,” the receiver wrote.

Goldberg’s filing states that he wrote to Joseph asking if he or anyone affiliated with his group had ever been accused of fraud or securities violation.

The lawsuits claim Quiros and Bill Stenger, former CEO and president of Jay Peak, misused $200 million in EB-5 funds as part of the development projects in the Northeast Kingdom.

Investors in the EB-5 program put $500,000 into a qualified project. They also must add an $50,000 administrative fee. The investor, in exchange, is eligible for permanent U.S. residency if the investment creates 10 jobs.

Stenger has reached a settlement in his federal lawsuit involving the SEC, agreeing to cooperate with investigators. He faces a possible civil penalty, depending on his level cooperation and ability to pay. A separate case against Stenger, brought by the state of Vermont is pending.

Quiros is contesting the state and federal lawsuits. Attempts to reach his attorneys Friday were unsuccessful.

Goldberg said he submitted the filing Friday to inform the court of the status of the offer.

“We would not have ever filed a report on it,” he said via email, “but Quiros filed the actual (Letter of Intent) so we felt it was necessary to let creditors and the court know that we did not think it was legitimate.”