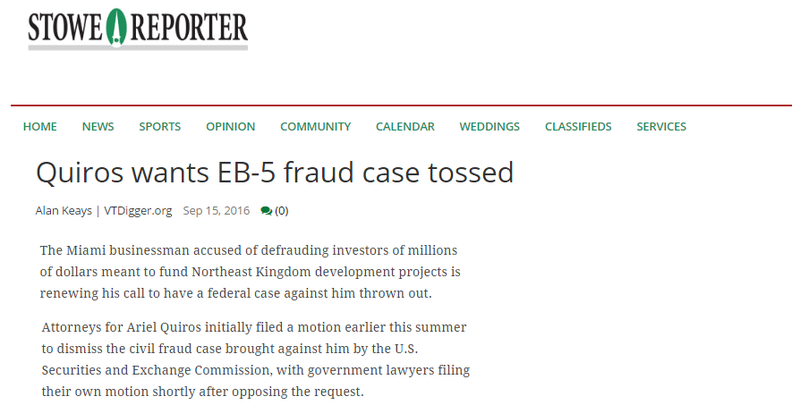 The Miami businessman accused of defrauding investors of millions of dollars meant to fund Northeast Kingdom development projects is renewing his call to have a federal case against him thrown out.

Attorneys for Ariel Quiros initially filed a motion earlier this summer to dismiss the civil fraud case brought against him by the U.S. Securities and Exchange Commission, with government lawyers filing their own motion shortly after opposing the request.

Late last week attorneys for Qurios submitted a new filing, again asking the judge presiding over the case in Miami federal court to toss the lawsuit despite claims by SEC attorneys that the arguments raised in the original motion to dismiss are “meritless.”

“But the SEC’s bluster reveals only its insecurity,” Scott Cosgrove, a Florida attorney representing Quiros, wrote in the latest motion. “After a three-year investigation, it has brought claims in a high-profile case that disregard established precedent and should be dismissed.”

The federal lawsuit along with one filed by the state in April allege that Quiros, owner of Q Resorts, a holding company that includes Jay Peak, and William Stenger, at the time CEO and president of Jay Peak, misused $200 million in funding from foreign investors through the federal EB-5 visa program.

Investors in the program put up at least $500,000, plus $50,000 for an administrative fee, and, in exchange, they become eligible for U.S. residency if each investment creates 10 jobs.

The state and the SEC both claim in the lawsuits that Quiros bought Jay Peak Resort on June 23, 2008, using EB-5 funds that was supposed to be kept in escrow to build two hotels.

Quiros and Stenger subsequently had to acquire additional investor funds to backfill the projects, setting up a “Ponzi-like” system where the developers were taking money from investors, according to the SEC lawsuit.

Stenger and Quiros received $440 million in funds and fees from EB-5 investors for eight projects, with six of those at Jay Peak.

Attorneys for Quiros filed the latest motion seeking to dismiss the federal lawsuit against their client one day after Stenger agreed to a settlement with the SEC in his case.

The motion makes no reference to Stenger’s settlement, and does not mention Stenger by name.

Stenger’s settlement calls for him to cooperate with investigators, and a civil penalty may be levied based on his level of cooperation and ability to pay.

The agreement does not resolve the state case, or prohibit state or federal prosecutors from filing criminal charges in the future.