US economy: Citizenship for sale 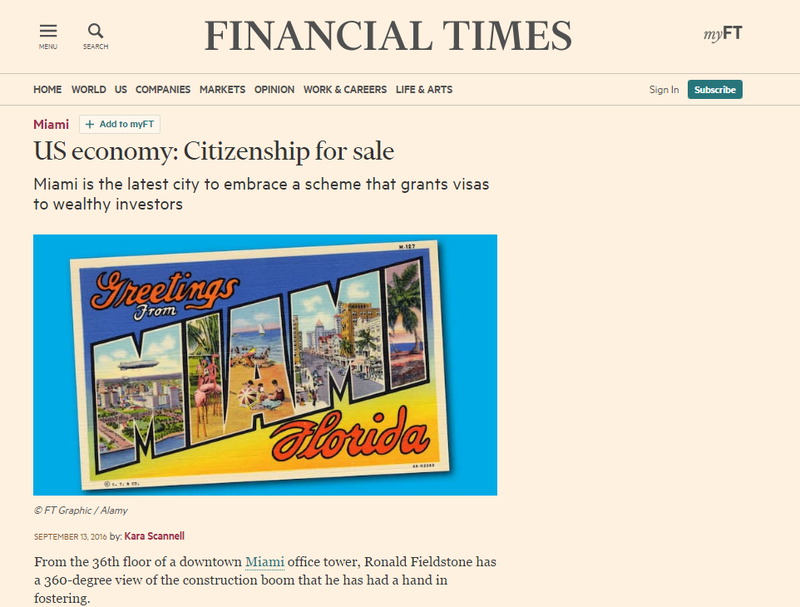 From the 36th floor of a downtown Miami office tower, Ronald Fieldstone has a 360-degree view of the construction boom that he has had a hand in fostering.

There is the high-speed rail line that will connect the city to Orlando, home of Disney World. To the west is the newly renovated Langford Hotel and to the north is the building site of the Paramount Miami Worldcenter, a 60-storey condominium and retail complex, where construction crews are digging the foundations.

All of those projects are funded, in part, via an investor visa programme known as EB-5 that gives investors a path to US citizenship. For a $500,000 investment in a project that creates at least 10 jobs in a high-unemployment area, a foreign national can eventually receive a green card that allows him or her to live and work permanently in the US.

Miami, already a magnet for wealthy families from Venezuela, Brazil and Argentina, is using the EB-5 programme as a tool to attract cash from China. Officials hope to transform Miami into an international banking centre with close ties to China, which they hope to cement by persuading Chinese airlines to begin nonstop flights from the mainland.

Miami’s embrace of the EB-5 is not without controversy. Critics say it is rife with fraud and used to launder money. Canada ditched a similar programme while Australia tightened its requirements after finding there was little economic benefit.

Some US lawmakers say it sends a bad signal — trading visas for cash from the wealthy while much of the money has gone to well-off areas, not the distressed regions the programme was designed to help.

Congress will vote later this month on whether to renew the programme. Even supporters like Mr Fieldstone say it needs more regulatory oversight to limit fraud and protect the national security interests of the US.

Advocates of the programme say it has pumped hundreds of millions of dollars into mega-projects in New York and California, including the 12.7m sq ft Hudson Yards office complex in Manhattan. Now Florida wants a bigger piece of the action. 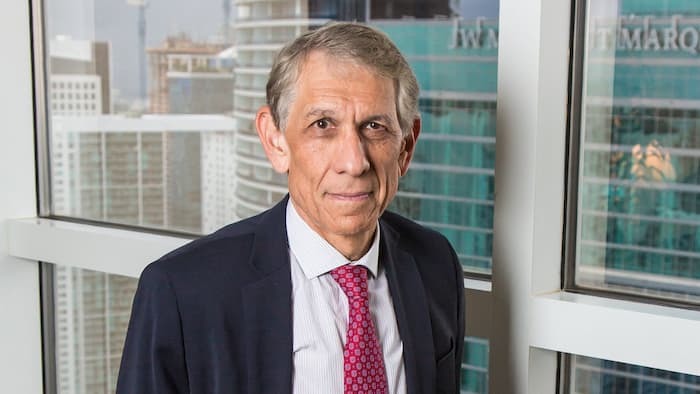 For decades, Mr Fieldstone’s legal practice dealt primarily with corporate securities work, but today he spends 50 per cent of his time working on EB-5. “The success rate is really high for EB-5 funded projects,” he said. “South Florida is a special place. You can’t duplicate it — the climate, transportation and beach. I think the Chinese look at it as a gateway city.”

The EB-5 programme was created in 1990 as part of the Immigration Act to spur the US economy and promote job growth. Since then it has brought in $15.5bn in investments and created 84,400 jobs, according to the US Citizenship and Immigration Services, a unit of the Department of Homeland Security, which oversees the programme. Applicants need to loan $1m to a job-creating business or $500,000 if the project is in an economically depressed area. After roughly five years the investor receives a green card and, if they are lucky, their money back with a profit.

Other countries have investor immigration programmes of varying levels. France requires a €10m investment in a project that creates 50 jobs. Malta’s programme, which issues an EU passport for €650,000, has drawn the ire of the European Commission. The UK raised its requirement to a £2m investment in government bonds.

The US programme sputtered along largely unused until the 2008 global financial crisis made it harder for real estate developers to obtain financing. Canada’s 2014 decision to close its programme, which had been extremely popular with wealthy Chinese, also gave the US version a boost.

The US scheme is capped at 10,000 visas annually, which it hit for the first time in 2014. Chinese investors are by far the biggest users, accounting for 86 per cent of the visas issued last year. That has created a backlog for Chinese applicants entering the programme, which is now up to 18 months. Some fear they will choose other countries given the delays.

The programme’s fast growth has exposed vulnerabilities in the system. There have been criminal cases alleging investor money was stolen. A Chicago man was charged with stealing $160m from investors that he purported to use to build a convention centre. He pleaded guilty earlier this year.

Two government watchdogs have found deficiencies in oversight. An accountability audit found USCIS failed to consistently enter information, such as names or dates of birth, in its system to track individuals for potential fraud. USCIS says it has consolidated its examination staff in Washington and has started random visits to regional centres. It is also expected to propose regulatory changes later this year to strengthen the programme, including raising the minimum investment.

Congress is divided over whether to improve the programme or simply end it, as Canada did. One lawmaker, Senator Dianne Feinstein, a Democrat from California who is the vice-chair of the Select Committee on Intelligence, says it should be shut down.

“I believe the programme is deeply unfair, sends the wrong message about this country’s values and is prone to fraud and abuse,” Ms Feinstein wrote in an op-ed last year. “It says that American citizenship is for sale, and that’s not what our country stands for.”

“It’s cash for a green card,” adds David North, a frequent critic of the EB-5 programme, who is a fellow at the Center for Immigration Studies, a conservative think-tank. “I don’t think we should be selling visas to anybody.”

One of his concerns, which are shared by some lawmakers and law enforcement agencies, is ensuring that cash is not being laundered or that the individual receiving the visa is not a threat to national security. “It’s very hard to trace money through particularly obscure Middle Eastern or Chinese financial systems,” Mr North says.

In Miami, the view is that the influx of capital will raise the city’s profile internationally and attract more business. Developers have been on the ground in China promoting the city as the best place to park their cash.

Real estate developers began their effort to recruit Chinese buyers five years ago, but now those efforts are interwoven with EB-5 financing.

Marketers for the Paramount Miami Worldcenter began pitching the residences in China last year. Paramount’s builders hired a feng shui expert who advised them on introducing the right earth, wood, metal, water and fire elements in the development. They were advised to position the chairs in the lobby to face the door and green potted plants were added to the seating area. A fireplace was also added. 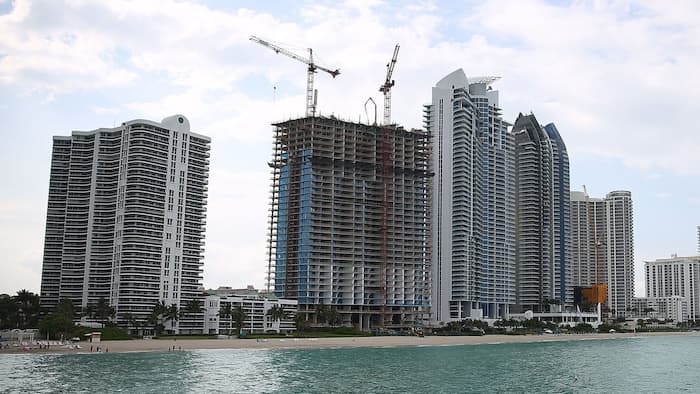 A condominium development in Florida

For the first time the developers of Paramount decided to use EB-5 to finance a project. In March, following the Chinese new year, they deployed a team to the southern city of Guangzhou to pitch to potential EB-5 investors. “There seemed to be a much greater interest by the Chinese for investment opportunities in the US,” says John Montani, a business consultant to the developer.

For many of the overseas investors there are other appeals, from access to the US education system for their children and a safeguard against political difficulties in their home country.

The Miami Chamber of Commerce 18 months ago launched an Asia task force. “We have very few people here who speak Mandarin and who really are familiar with Asian and Chinese culture and customers. We have to build up our troops,” says Seth Gordon, chair of the task force. 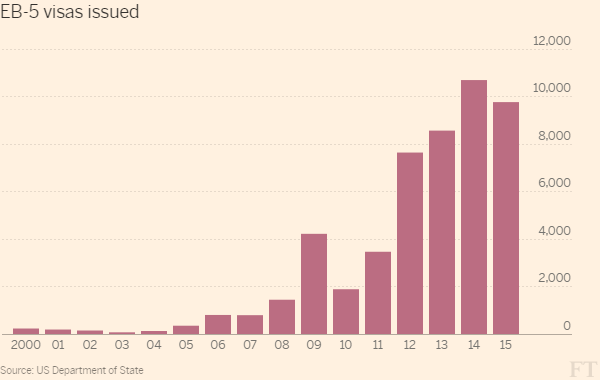 He says the city also needs to hedge its bets against cycles of instability in Latin America, where countries such as Venezuela and Brazil have been hit by the commodities bust. “When China began to pay attention to us [it’s like] when somebody is passing an approving look at you across the bar and you smile,” Mr Gordon says. “You begin to think, ‘Maybe we should have a relationship.’”

One hurdle is changing the image of Florida that many associate with Mickey Mouse or drug trafficking. The Chamber of Commerce arranged a visit of a group of Chinese journalists to help promote the images of sandy beaches, clean air and ocean breezes.

Two months later, a delegation including the Miami-Dade County Commissioner flew to China and made presentations to China Eastern Airlines, China Southern Airlines and Hainan Airlines to discuss offering a nonstop service, according to a written memorandum summarising the mission, and viewed by the Financial Times. China Eastern put Miami on its “shortlist” for introducing the new service within one to two years, according to the memo.

Angie Ki was among those in the Miami delegation. Ms Ki had grown up in Malaysia and lived in North Carolina for 25 years with her husband and children, working in real estate.

During a family visit in 2014 to Hong Kong, she was struck by the televised broadcasts of US President Obama’s visit to China when he spoke of the US lifting sanctions on Cuba and the expansion of the Panama Canal. Seeing parallels between Cuba and the lost opportunity for many to capitalise on the growth of China’s economy, Ms Ki had an idea. “I had to be in Asia to discover Miami,” she says.

After some persuasion, her husband agreed to relocate to downtown Miami in May 2015 and Ms Ki has been recruiting Chinese to Florida.

Chinese investors “look at Cuba as almost 20 years behind China. They’re more excited about Cuba than Florida to be honest. But Miami is a stepping stone to go to Cuba,” Ms Ki says.

When a group of Hong Kong businessmen came to visit, Ms Ki took them on a boat ride around the city.

Ms Ki helps parents seeking EB-5 visas for their children, who will then go to university in the US and, with a green card, be in a better position to compete for jobs after graduation.

“Miami is just waking up to the Asian market. If I was here three years ago I couldn’t get a job. Now, I can speak Chinese and have connections in Asia. It’s hot,” she says.

“You’re going to see a lot of them coming,” Ms Ki predicts.