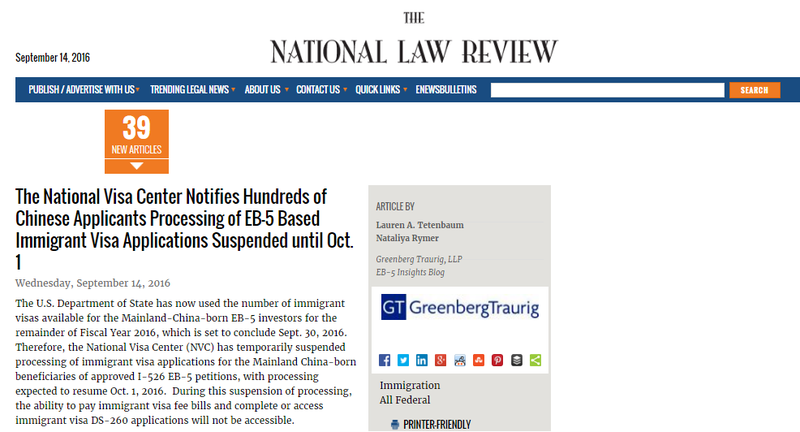 Section 203 of the Immigration and Nationality Act limits the number of immigrant visas available for each category, with approximately 10,000 set aside for the EB-5 immigrant investor category.  This total number is further subject to per-country limits, and the immigrant visa availability for the Mainland China-born EB-5 investors is already subject to a backlog. As of Sept. 13, 2016, NVC has advised that immigrant visa numbers are no longer available in the current fiscal year for EB-5 mainland-China applicants under the limitation prescribed by law.  The current fiscal year is set to end on Sept. 30, 2016.

The State Department has announced that additional visa numbers may still become available this fiscal year to mainland-China born applicants if the Department determines that the remaining visa numbers for fiscal year 2016 would be otherwise unused by other countries. In the meantime, NVC has been sending notices explaining this via e-mail and mail to those applicants affected by the suspension. The State Department has requested that applicants subject to the suspension in processing contact NVC only to report a change in contact information or change in eligibility for the visa.