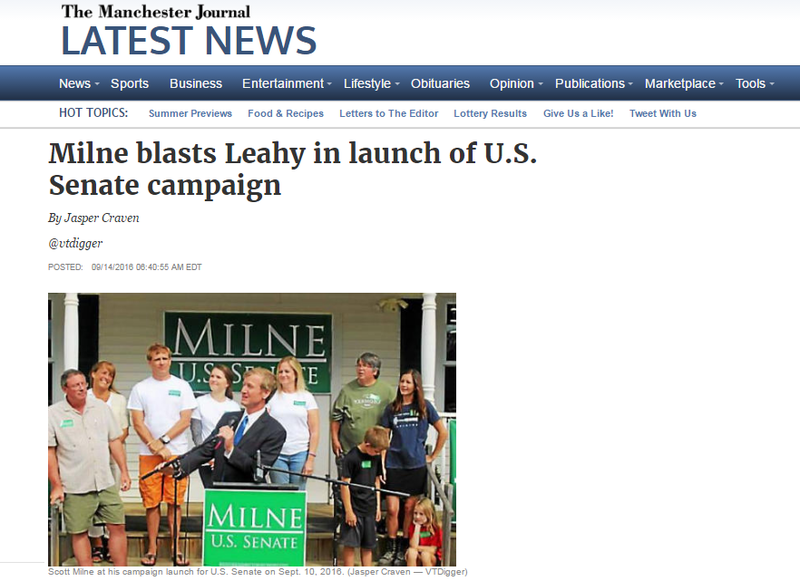 In the kickoff of his bid to unseat one of the longest serving senators in U.S. history, Scott Milne depicted Washington, D.C., as a cesspool of seedy values, dirty money and unresponsive politicians.

Milne castigated the U.S. government in general and the U.S. Senate in particular.

"I believe our nation and our planet are in perilous times, the old ideas are not working," Milne said Saturday morning in front of the Washington town clerk's office. "America's government is unable to bridge our divides. This is the fault of the United States Senate. This is the fault of career politicians and the big money from special interests that prop them up and protect them. We have to do better."

Closer to home, he cast Democrat Sen. Patrick Leahy as a politician tied to special interests.

The Republican candidate for the U.S. Senate then shifted the lens to his hometown of Washington, Vermont, as a rural haven where people work hard and "talk the talk and walk the walk," Milne said.

Milne promised to bring Orange County values to the U.S. Capitol if elected, and he aimed to pigeonhole Leahy as a son of Washington, D.C.

Milne said Leahy's involvement with the federal EB-5 visa program was questionable, and again demanded that the senator release all communications regarding the controversial visa program. And he criticized the senior senator's campaign war chest of $6 million as a sign of cronyism, pointing to Leahy's financial support from the controversial drug manufacturer Mylan.

Milne promised to run a low-cost campaign devoid of any special interest money or big media buys, and his most recent filing with the Federal Election Commission shows just over $22,000 in the bank.

The Pomfret businessman often invoked the senior senator's nearly 42 years in office and promised that, if elected, he would only serve two terms.

"I believe Patrick Leahy should retire," he said.

Milne's Saturday kickoff — which featured coffee, donuts and more than 50 supporters — focused almost exclusively on his gripes with Leahy.

He offered no real vision for how he would serve in the chamber, and what issues animated him besides reforming the culture of D.C. Milne said he supported the repeal of Citizens United, and would introduce legislation, if elected, to impose term limits in the U.S. Congress.

With the U.S. Congress suffering a historically low approval rating — just 18 percent in August — Milne's anti-D.C. message could resonate with many Vermont voters. That said, Leahy holds a 62 percent approval rating, according to a recent Vermont Public Radio poll.

Former Republican Gov. Jim Douglas, who attended the kickoff, spoke about the dissonance in polling in an effort to portray Leahy as a part of the problem.

"Across the country people say 'Oh, it's all those other people, it's not my senator or my representative, he or she is wonderful,'" he said. "Well, wait a minute, isn't it a sum of the parts? It's everybody's problem down there."

Comedian Rusty DeWees, who also spoke at the kickoff but did not endorse Milne, said that Milne's unconventional campaign style was a sign he was a true outsider.

"He gets picked on for starting the campaign late, and all you hear is people complaining about how much money is being spent on campaigns," DeWees told the crowd. "Yet he's not spending that much money and they make fun of him. It seems odd to me."

He said he appreciated that Milne often walked alone in parades or at the fair, and that much of his campaigning has been waving on the side of country roads. In a lighthearted dig at Douglas, DeWees said that most other politicians were more coiffed and protected from exposure to the public.

"Now Governor Douglas — beloved — had an entourage of 56 people running around after him, unbelievable," DeWees said with a Vermont twang. "He had a tailor, a makeup person, seven people alone getting him coffee."

"Milne is alone," Dewees said. "I love that about him."