Deconstructing the October EB-5 Visa Bulletin (What does it mean?) 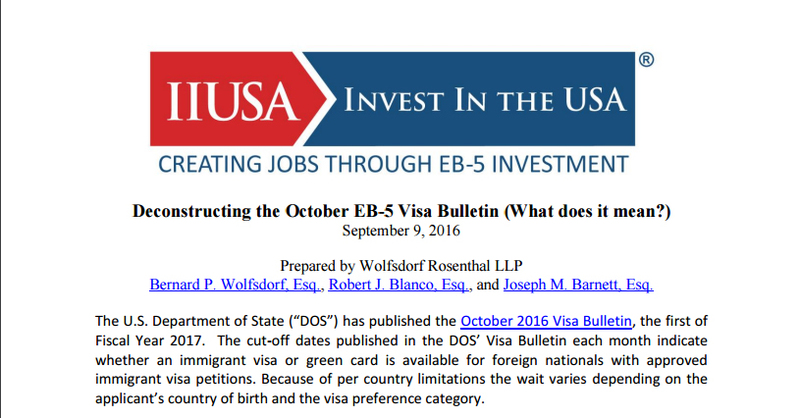 The U.S. Department of State (“DOS”) has published the October 2016 Visa Bulletin, the first of Fiscal Year 2017. The cut-off dates published in the DOS’ Visa Bulletin each month indicate whether an immigrant visa or green card is available for foreign nationals with approved immigrant visa petitions. Because of per country limitations the wait varies depending on the applicant’s country of birth and the visa preference category.

Due to the surge in EB-5 Form I-526 petition filings over the last few years, particularly from Mainland China, many immigrant investors anxiously await the information in each month’s Visa Bulletin to determine if they are eligible to proceed to the next step of their immigration process and apply for conditional green cards. The October Visa Bulletin is significant because it represents the beginning of the immigration fiscal year when the new annual allotment of visas becomes available.

This slow forward movement is consistent with the pattern we have seen over the past few months. Applicants chargeable to Mainland China whose priority date, or I-526 filing date, is earlier than February 22, 2014, may be scheduled for a final interview at the U.S. Consulate in Guangzhou. If lawfully present in the U.S. and otherwise eligible to adjust status, they may file Form I-485 Application for Adjustment to Permanent Resident Status. All EB-5 applicants who are not subject to the Mainland China quota remain “Current” and will continue to have a green card immediately available and are subject only to routine processing delays, not to a quota-based waiting line The big surprise is that the Chart B Date for Filing (DFF) cut-off date retrogressed almost a full year from May 1, 2015 to June 15, 2014. Introduced as part of President Obama’ November 2014 Visa Modernization Executive Action proposal to reform our immigration laws, this Chart B was designed to ensure all visa numbers are fully utilized. This is the first time since the DOS began publishing this “Date for Filing - Chart B” last year that this cut-off date has moved at all.

The reason for this slow movement of Chart A, and huge retrogression of Chart B, is because of the large number of approved petitions at the National Visa Center currently waiting for final interviews. For this reason forward movement of Mainland China cut-off dates in the future is likely to be slow.

Section E of the Visa Bulletin confirms that the EB-5 category will likely see “slow forward movement” for applicants chargeable to Mainland China through the first quarter of Fiscal Year 2017.

In the next few days, USCIS will announce whether applicants may file an application to adjust status in the U.S. if their Priority Date is current according to the later cut-off date listed in Date for Filing-Chart B (June 15, 2014), or whether they have to wait for a visa to be “available” under the Final Action Date-Chart A (February 22, 2014).

If USCIS opens the door to Chart B filing of adjustment, this will allow individuals who are physically present in the United States and eligible to adjust status to file their second stage adjustment of status to green card applications effective at the beginning of October 2016.

Applicants for adjustment of status are also eligible for work and travel permits that take about 90 days to process.

USCIS has only allowed foreign nationals with employment-based petitions (such as Form I-526) to adjust status based on Date for Filing-Chart B in October 2015 and in November 2015.

Since the EB-5 Regional Center program is scheduled to expire again on September 30, 2016, the corresponding I5 ($500,000 investment) and R5 ($1 million investment) subsections of the EB-5 preference category are listed as “Unavailable” in the October Visa Bulletin. When Congress acts to extend the Regional Center program as it has on numerous occasions in the past, Chart A will automatically become “Current” for all countries other than Mainland China, which will then have a cut-off date of February 22, 2014. This is identical to last year’s October Visa Bulletin when an extension was required. No new Visa Bulletin will be published as the changes will automatically be implemented.
With the September 30, 2016 sunset date rapidly approaching, the EB-5 industry is anxiously waiting for signs of legislative activity.

An EB-5 bill is likely to be introduced within days but it may be a placeholder bill as it appears there may not be enough time for Congress to pass a substantive bill this month, or even in the “lame duck” session after the election. Many expect the Regional Center Program will be granted another short extension via a continuing resolution until January 2017, when the new Congress will be ready to provide much needed reform.