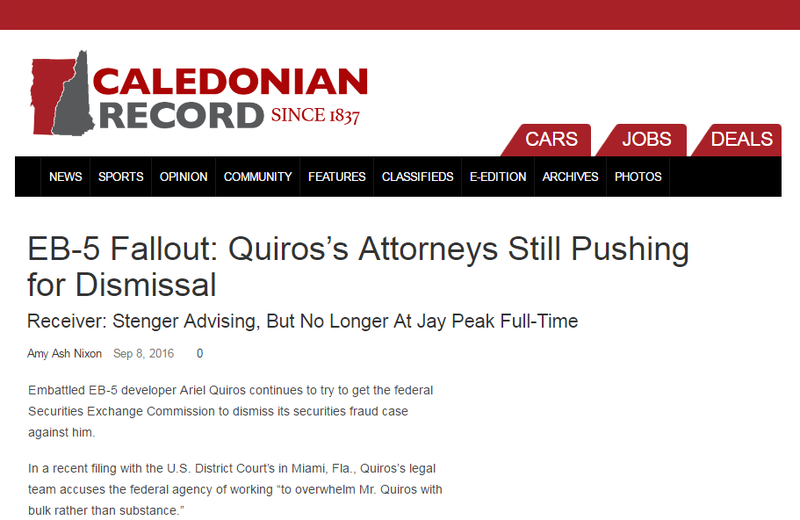 Embattled EB-5 developer Ariel Quiros continues to try to get the federal Securities Exchange Commission to dismiss its securities fraud case against him.

In a recent filing with the U.S. District Court’s in Miami, Fla., Quiros’s legal team accuses the federal agency of working “to overwhelm Mr. Quiros with bulk rather than substance.”

His attorneys maintain Quiros himself never made any misrepresentations in the securities offerings for the Northeast Kingdom Economic Development Initiative projects at Burke, Jay and Newport.

In April, Quiros and his former business partner, Bill Stenger, were implicated in what state and federal government officials characterized as a massive scheme to defraud international investors.

Under the auspices of the federal EB-5 program, more than 700 foreigners invested $500,000 each to the economic development projects in the Northeast Kingdom, expecting they would receive permanent green cards and a possible return on their financial investment.

Both Quiros and Stenger stand accused of misappropriating more than $200 million in the investor funds by using the funds for purposes other than the stated investment, including to backfill costs for earlier projects.

Quiros is also accused further of pocketing more than $55 million in investor funds to fuel his lavish lifestyle, including the purchase of two luxury condos in New York City, court documents detail.

Quiros’s attorneys also continue to say that most of the allegations against him are past any statute of limitations.

Further, his attorneys cite deficiencies in the SEC case against Quiros in their latest 25-page motion before the court, and urges the case be dismissed.

Stenger, meanwhile, recently reached a settlement with the SEC, and will be cooperating as the agency prepares to take the Quiros case to trial next fall. The settlement does not protect Stenger from any possible criminal charges that may come later, and also does not protect him from civil penalties being assessed.

Until last week, Stenger remained working full-time at Jay Peak Resort, with the federal receiver. On Friday, receiver Michael Goldberg, on the Jay Peak Receivership website, posted a brief update noting that Stenger’s services are no longer needed full-time, and thanked him for his assistance in getting the resort’s management back on track the past few months.

Goldberg’s notice regarding Stenger’s status at Jay Peak was addressed to investors and potential creditors of Jay Peak, and said that Stenger will continue to “provide assistance to the Receiver on an as-needed basis.”

“This change in Bill’s status coincides with the opening of the Burke Hotel and the stabilization of the Jay Peak Resort and the recognition that his services are no longer needed on a full-time basis,” Goldberg stated. “We thank Bill for his assistance over the past few months.”

Stenger, contacted by the newspaper on Wednesday, said in a text message, “As the receiver said, I’m working directly with him, at Jay, Burke and Newport … still helping in each.”

Quiros’s attorneys accuse the SEC of having made up theories and improperly reducing its burden of proof in its claims.

“The allegations are textbook examples of conclusory allegations; many consist of unsupported or internally contradictory monetary amounts; none sets forth when or how such ‘ill-gotten gains’ occurred or the basis upon which the SEC seeks to remedy the losses.”

Quiros’s attorneys argue that the federal case does not show receipt of ill-gotten gains, but “include either the alleged use of money long after it was supposedly ill-gotten; or the failure to use money as contractually required…The SEC cannot reduce its pleading burden by avoiding its own allegations that the offerings themselves were fraudulent and the offerings themselves were how ill-gotten gains accrued.”

“There is no good-faith basis for the SEC to pursue its claims regarding offerings that occurred more than five years ago,” Quiros’s attorneys go on.

His attorney argue that the asset freeze placed on Quiros is “disproportionate,” and includes time-barred claims. The recent motion states that the SEC’s receivership is “overbroad,” and aims “to make it difficult for Mr. Quiros to defend himself.”

Quiros’s attorneys insist that the SEC cannot prove he made misrepresentations to investors in Phases I-VI at Jay Peak, nor in Phase VII and the AnC Bio partnerships. The SEC argues that Quiros had “ultimate authority” over the offerings, because he was one of the managing members and the general partner in the enterprise.

The civil case against Quiros seeks to prevent him from participating in EB-5 offerings and projects going forward.

Stenger agreed to that restriction in his recently announced settlement with the SEC.