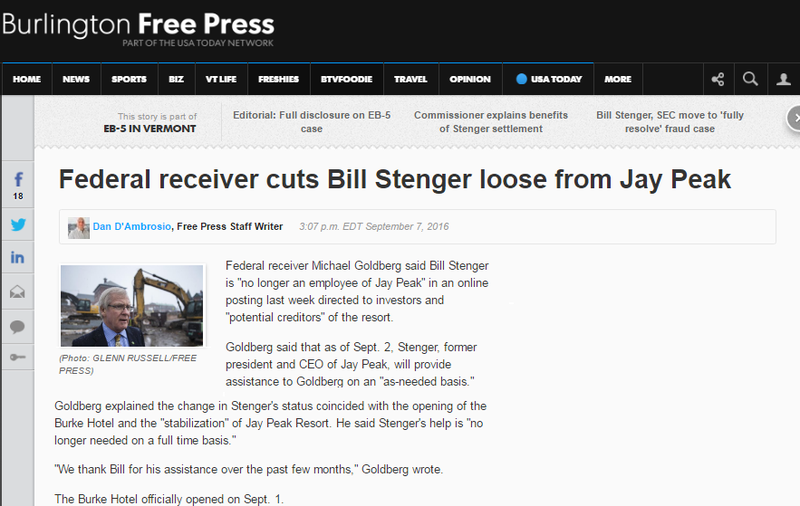 Federal receiver Michael Goldberg said Bill Stenger is "no longer an employee of Jay Peak" in an online posting last week directed to investors and "potential creditors" of the resort.

Goldberg said that as of Sept. 2, Stenger, former president and CEO of Jay Peak, will provide assistance to Goldberg on an "as-needed basis." Goldberg explained the change in Stenger's status coincided with the opening of the Burke Hotel and the "stabilization" of Jay Peak Resort. He said Stenger's help is "no longer needed on a full time basis."

"We thank Bill for his assistance over the past few months," Goldberg wrote.

Goldberg acknowledged to the Burlington Free Press in April that Stenger was helping him run Jay Peak, at a reduced salary of under $100,000 annually. Goldberg said he had learned, as an experienced receiver, that it saves a lot of time and money to tap into the knowledge and experience of owners of seized properties when possible. He said Stenger had been very helpful.

Goldberg added that when he first met Stenger he was "visually upset," with tears in his eyes.

Goldberg took over Jay Peak and other properties in the Northeast Kingdom connected to an alleged EB-5 fraud involving Stenger and his former business partner, Ariel Quiros. The other properties include Burke Mountain Resort and AnC Bio in Newport. AnC Bio was supposed to have become a cutting edge biomedical facility but never got off the ground as the money raised for the facility was allegedly misappropriated by Stenger and Quiros for other purposes.

Under the federal EB-5 program, foreign nationals who invest $500,000 in development projects in rural or economically depressed regions of the United States have a path to a green card if a certain number of jobs are created as a result of the project. Stenger and Quiros raised hundreds of millions of dollars for EB-5 projects in the Northeast Kingdom.

Investigations by the U.S. Securities and Exchange Commission and the Vermont Department of Financial Regulation found Quiros and Stenger misappropriated $200 million of the money they raised, and that Quiros personally took $50 million. Stenger said last week he has entered into a settlement with the SEC to fully resolve his fraud case; Quiros continues to contest the case.