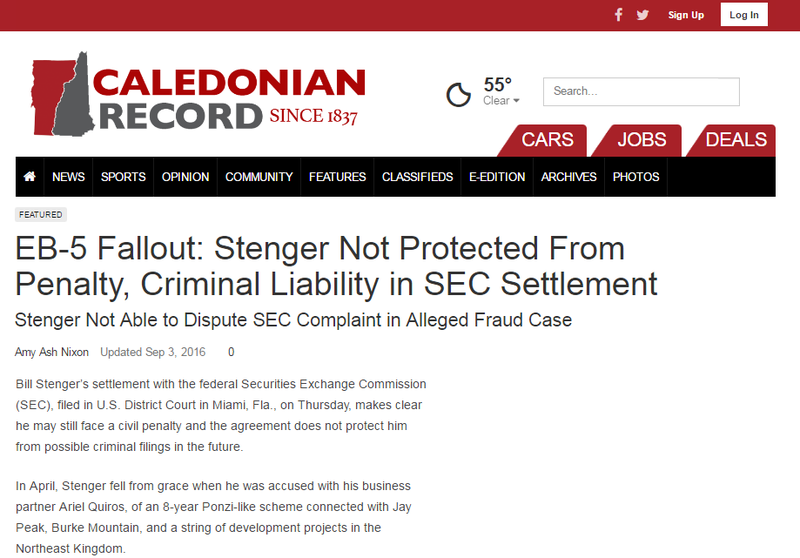 Bill Stenger’s settlement with the federal Securities Exchange Commission (SEC), filed in U.S. District Court in Miami, Fla., on Thursday, makes clear he may still face a civil penalty and the agreement does not protect him from possible criminal filings in the future.

In April, Stenger fell from grace when he was accused with his business partner Ariel Quiros, of an 8-year Ponzi-like scheme connected with Jay Peak, Burke Mountain, and a string of development projects in the Northeast Kingdom.

Under the terms of the SEC settlement, in a permanent court injunction granted, Stenger is prevented from ever being involved in another EB-5 project.

More than 700 international investors pledged $500,000 apiece in the projects in the Northeast Kingdom, and the immigration status of many of those investors is now in jeopardy, according to state and federal documents.

Stenger’s settlement is neither an admission nor a denial of wrongdoing.

The judgment does not protect Stenger “…from the facts underlying this action or immunity from any such criminal liability.” The court makes clear, too, that “Stenger may be directed to pay a civil penalty,” in the case.

In 25 pages of court filings connected with the settlement, which Stenger himself alerted media to late Thursday, the record shows that Stenger will not be barred from “…arguing that he did not violate securities fraud laws…may not challenge the validity of the Consent or this Judgment…(and) waives any right he may have to appeal from the entry of the Judgment.”

The judgment also restricts Stenger from being able to claim or apply for tax credits or deductions “with regard to any federal, state, or local tax for any penalty amounts that Stenger pays pursuant to the Judgment.”

Stenger entered the agreement with the SEC voluntarily, the document notes.

In April, the SEC, as well as the Vermont Attorney General, filed complaints alleging that Northeast Kingdom Economic Development Initiative principal Ariel Quiros and Stenger, his business partner and the lead salesman internationally to reel in EB-5 funds from foreign investors, allegedly had been part of an eight-year Ponzi-like scheme.

After the charges were made public, Stenger immediately said he had no knowledge of illegal activity and has maintained he operated in good faith.

Quiros, in federal depositions, said he did not misrepresent offerings to investors, and has said he did not steal any money, that the funds he used and withdrew were his money, the fees he was due as the project’s developer.

Stenger loses the right in the agreement to contest the factual allegations asserted in the SEC case.

As part of the settlement, Stenger agreed to withdraw “any papers filed in this action to the extent that they deny any allegation,” in the federal case.

Stenger has been, and will continue to cooperate with SEC authorities as the case moves ahead against his former business partner, Ariel Quiros, who is expected to be the focus of a trial next fall, 2017.

He agrees to be interviewed by SEC staff and to provide testimony at depositions, hearings and trials, for which he will be reimbursed his expenses at “the then-prevailing U.S. Government per diem rates.”