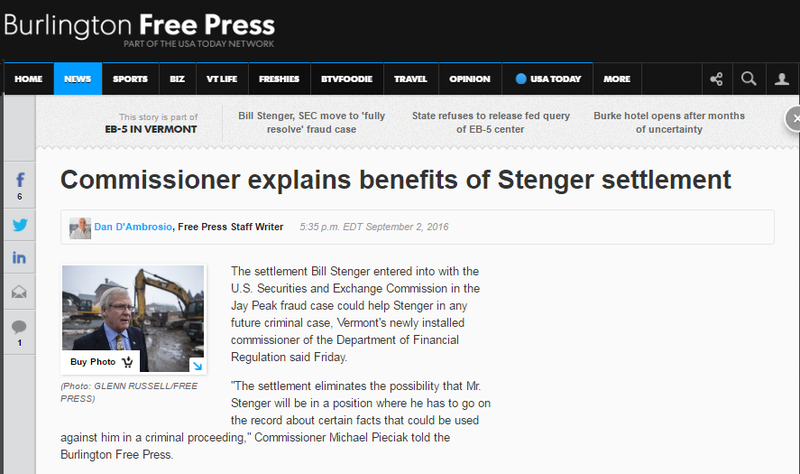 The settlement Bill Stenger entered into with the U.S. Securities and Exchange Commission in the Jay Peak fraud case could help Stenger in any future criminal case, Vermont's newly installed commissioner of the Department of Financial Regulation said Friday.

"The settlement eliminates the possibility that Mr. Stenger will be in a position where he has to go on the record about certain facts that could be used against him in a criminal proceeding," Commissioner Michael Pieciak told the Burlington Free Press.

Stenger's settlement with the SEC has no impact on the criminal investigation itself — confirmed as ongoing by U.S. Attorney for Vermont Eric Miller in April — but the agreement does mean Stenger can avoid being deposed in the SEC case, where he would be asked "tough questions" under oath, Pieciak said.

"A big thing (Stenger) got out of (the SEC settlement) is that he neither admits nor denies the allegations in the federal complaint," Pieciak said.

The settlement is a "double-edged sword," however, Pieciak said, because Stenger no longer can deny any of the allegations in the SEC's civil complaint.

"He has made such denials in the past," he said. "He doesn't get the benefit going forward of denying such allegations."

Stenger is at the center — together with business partner Ariel Quiros — of one of the biggest alleged frauds in the history of the federal EB-5 program. Stenger and Quiros are accused of misappropriating some $200 million raised from foreign investors, who each chipped in $500,000 for projects at Jay Peak, Burke Mountain and Newport.

Under the terms of EB-5, those investors have the opportunity receive a green card if the projects generate a specified number of jobs.

A civil investigation by the state ran concurrently with the inquiry by the SEC, but was independent. Pieciak said Stenger's settlement with the SEC has no bearing on the state's case against him.

"We worked closely with the SEC and enjoyed that relationship," Pieciak said. "We coordinated filings on the litigation front, but we did not partner with them on the settlement. Our litigation is very much active."

Pieciak said the Department of Financial Regulation has no pending settlement with Stenger.