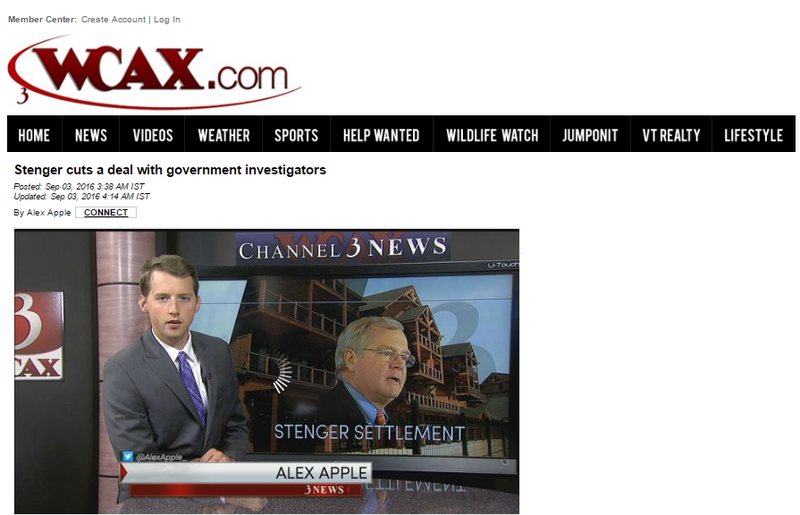 A settlement for one man at the center of the Northeast Kingdom EB-5 controversy. And we're learning that an agreement may be in the works to sell Jay Peak.

Bill Stenger, one of the developers of Jay Peak and Burke Mountain, says he's reached an agreement with the Securities and Exchange Commission. That agreement "sets up a framework to fully resolve the case the SEC filed against (him)."

"It means they have not fully reached where they need to be, but from the sound of it, it appears that he has agreed to cooperate with the SEC and I would read into that his cooperation will make what happens with him going forward in the future significant, because if he cooperates, the SEC is more likely to go easy with him," legal analyst Jerry O'Neill said.

Meanwhile, Stenger's co-defendant, Ariel Quiros, has an attorney's bill worth more than $600,000 according to SEC documents. He wants the feds to free up his assets to pay for those attorney fees, and his legal team says he has an offer in writing from an unknown buyer to purchase Jay Peak Incorporated for $93 million.

Stenger's deal with the SEC only involves the civil complaint that includes Jay Peak and Burke Mountain. He is still under a criminal investigation by the U.S. attorney and he could still face civil penalties.

The receiver at Jay Peak, who is sent in by the SEC to keep projects afloat, has hired Stenger to help him because of Stenger's previous knowledge of the projects. That's not true for Quiros.

Stenger's presence could help contractors get their money back more quickly. The receiver freed up $13 million recently in an agreement with Citibank.

"Just today he announced that the funds from a settlement with Citi Bank will be used to begin paying the subcontractors on the hotel project, AnC project and Jay Peak project," said Sandy Fead, an attorney for construction company PeakCM.

Quiros is asking for $640,000 in assets to be unfrozen so that he can pay his legal fees. The SEC says those legal fees are exorbitant and above market value.