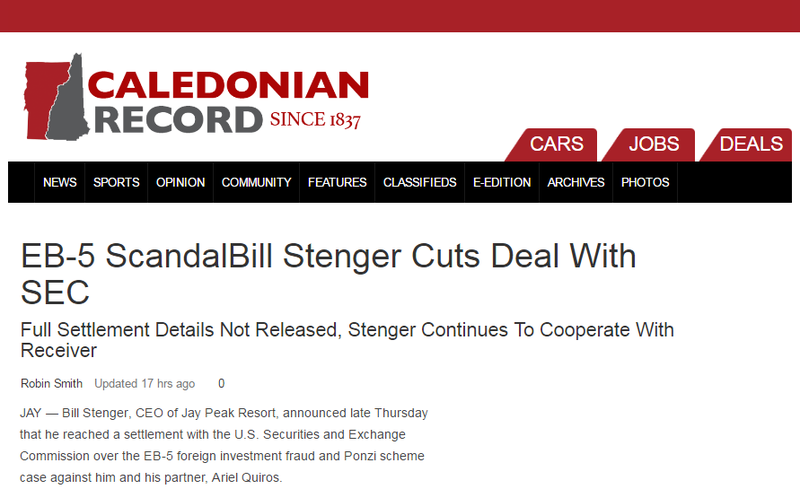 Bill Stenger, CEO of Jay Peak Resort, announced late Thursday that he reached a settlement with the U.S. Securities and Exchange Commission over the EB-5 foreign investment fraud and Ponzi scheme case against him and his partner, Ariel Quiros.

The negotiations between the SEC and Stenger have been ongoing. Stenger is being paid to help a court-appointed receiver operate Jay Peak Resort, where Stenger was the lead marketer for more than $200 million in expansion projects there and at Burke Mountain.

In a letter, Stenger said he has not admitted or denied any of the accusations against him that were filed in April and afterward in U.S. District Court in south Florida.

“I have entered into a settlement with the SEC that sets up a framework to fully resolve the case the SEC filed against me,” Stenger wrote.

“I also have been fully cooperating with the receiver since his appointment.

“Pursuant to the settlement with the SEC, I have not admitted nor have I denied the allegations of the amended complaint.

“Based on the terms of the settlement, this is all I can say and will be saying,” Stenger said.

“I ask that you please respect that I will not be making any more public statements about the settlement nor about the case. I want to focus my efforts fully to assist the receiver and to help the investors,” Stenger concluded.

Last week, Stenger’s attorneys filed a motion in court asking for more time to negotiate with the SEC.

The SEC first filed its case on April 11 against Stenger and Quiros, the partner who is accused of being the mastermind of a Ponzi-like scheme through eight partnerships at Jay Peak Resort, Burke Mountain Resort and in Newport City.

The SEC filed an amended complaint on May 17.

Stenger is cooperating with authorities and working with receiver Michael Goldberg as he oversees the Quiros-Stenger EB-5 conglomerate called The Northeast Kingdom Economic Development Initiative.

The pair raised more than $350 million from hundreds of immigrant investors through the EB-5 program, which grants green cards to investors whose $500,000 pledges lead to the creation or preservation of jobs.

The civil cases allege that more than $200 million of those foreign investors’ pledges had been misappropriated.

Quiros was accused of personally skimming another $50 million-plus for personal use.

Stenger was accused of facilitating or not properly overseeing how Quiros was handling some of the money.

They are accused of using money intended for one project to finish others. Most Jay Peak projects were completed, as was the Burke Hotel which opened Thursday. Newport City won’t see a biotech plant and has a razed block downtown that was intended for a hotel. All the properties will be sold to recoup investors and contractors.

Court records show Quiros is not likely to be offered a settlement opportunity. His trial is expected to begin in the fall of 2017.

The SEC has reached settlement deals with Citibank and financial firm Raymond & James in the cases over how money was handled.