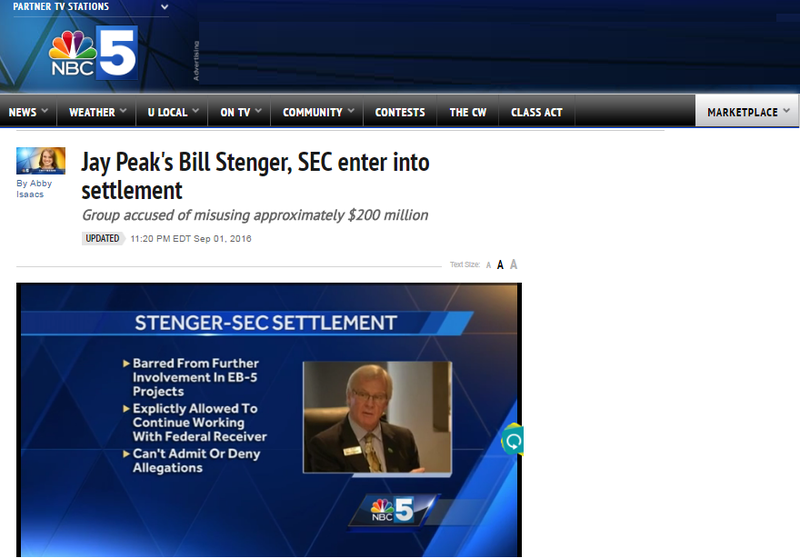 Bill Stenger announced Thursday that he has entered a settlement with the Securities and Exchange Commission, which accused him and Ariel Quiros of operating a multi-million dollar Ponzi-like scheme.

The businessmen are behind redevelopment projects at Jay Peak, Burke Mountain and in the city of Newport. Quiros was not mentioned in the settlement.

Key points of the settlement include that Stenger is permanently restrained from being involved in any EB-5 project from this point forward. However, he can continue working on the Jay Peak Resort project, as long as he is supervised by the federal Receiver currently running the resort, Michael Goldberg. Stenger said he has been fully cooperating with Goldberg since the complaint was filed in April.

As part of the deal, Stenger cannot admit or deny allegations that he violated securities laws. He has also agreed to make himself available for interviews with the SEC, and may still have to pay a civil penalty.

Quiros and Stenger are suspected of misusing approximately $200 million they raised from foreign investors participating in a federal government program that provides incentives to citizenship for job-creating development.

Stenger acknowledged the settlement with the SEC in a written statement Thursday.

"I have entered into a settlement with the SEC that sets up a framework to fully resolve the case the SEC filed against me," Stenger said in a prepared statement.

In court filings, the developers have repeatedly denied any wrongdoing.

"Based upon the terms of the settlement, this is all I can say and will be saying. I ask that you please respect that I will not be making any more public statements about the settlement nor about the case as I want to focus my efforts fully to assist the receiver and to help the investors," Stenger said.