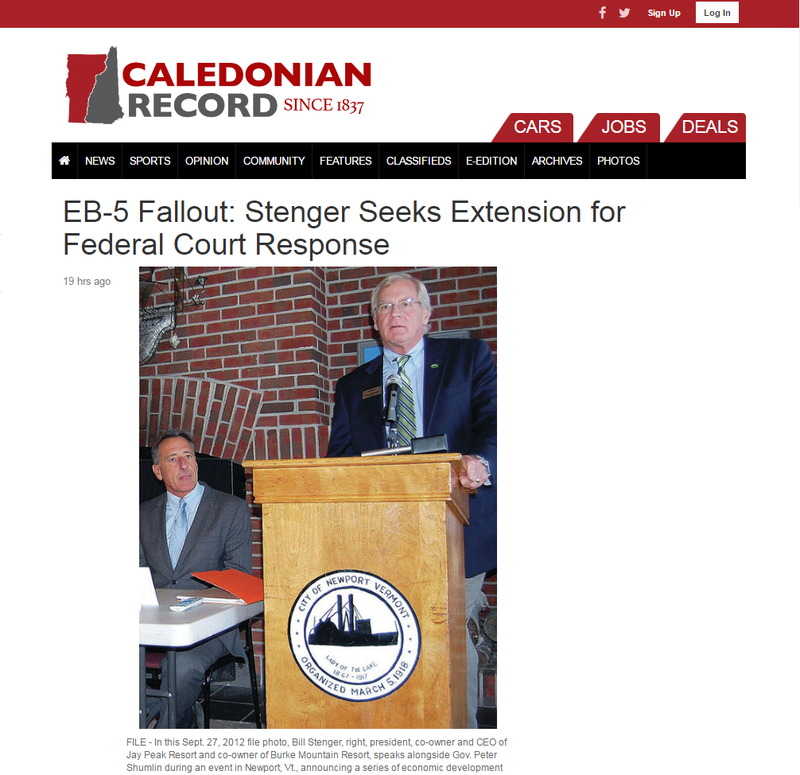 The attorneys for Bill Stenger, who was implicated in a securities fraud scheme at Jay Peak and Burke Mountain Resort with his business partner Ariel Quiros, have asked a federal judge in Florida for more time to respond to the Securities Exchange Commission complaint.

The SEC does not oppose Stenger’s motion, the third such motion since the SEC case was brought in federal court in mid-April, the record shows.

In an Aug. 18 motion, Stenger’s legal team asked for the response deadline to be extended to Sept. 9.

The SEC first filed its case against Quiros, who is accused of being the mastermind of a Ponzi-like scheme through eight partnerships, mainly based at Jay Peak Resort and related projects, but also including Burke Mountain Resort, on April 11.

The SEC filed an amended complaint about a month later, on May 17, in the case.

Stenger had earlier been granted an extension in late June, to file his response by Aug. 19, last Friday.

According to the most recent motion for more time, if a settlement is reached between Stenger and the federal agency by that date, “The entry of a settlement agreement between the parties would obviate the need for Defendant to file a response to the Amended Complaint, and thus conserve resources.”

Stenger’s attorney notes that the motion for the extension of time is due to the hoped-for settlement agreement between Stenger and the SEC, “…and is not interposed for purpose of delay or other improper purpose.”

Neither the SEC nor the federal receiver appointed by the federal court to take control of the asset properties involved in the alleged fraud case, Michael Goldberg, oppose Stenger’s request, the motion notes.

Stenger is cooperating with authorities and working with Goldberg at Jay Peak as Goldberg continues to work through the situation with the eight partnerships connected to the Quiros-Stenger EB-5 conglomerate called The Northeast Kingdom Economic Development Initiative.

The pair raised more than $350 million from hundreds of immigrant investors through the EB-5 program, which grants green cards to investors whose $500,000 pledges in economic development projects lead to the creation or preservation of jobs.

In mid-April, following a lengthy federal and state investigation, civil cases were brought by the SEC and the Vermont Attorney General against Quiros and Stenger, alleging that more than $200 million of those foreign investors’ pledges had been misappropriated, and further that Quiros had personally skimmed another $50 million-plus for personal use, including the purchase of two luxury New York City condos, among other lavish purchases.