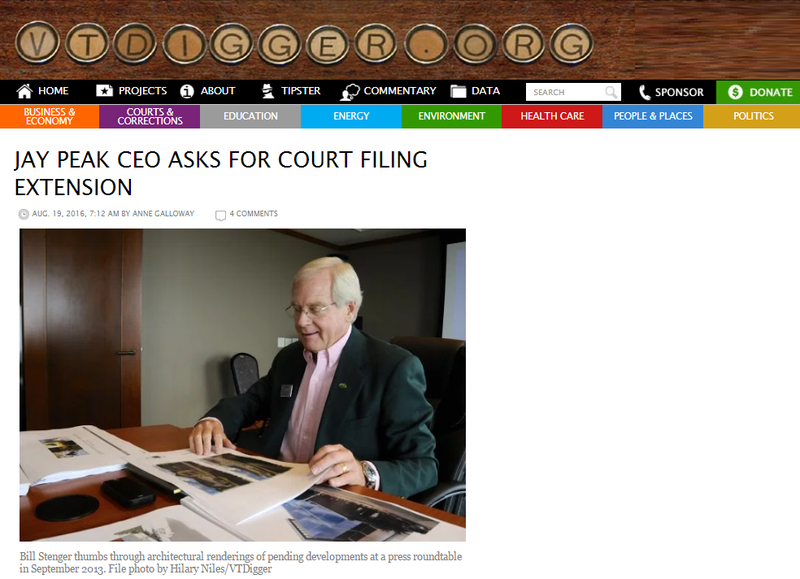 Bill Stenger, the CEO and president of Jay Peak Resort, has asked a Miami federal court for an extension.

Stenger was supposed to file a response earlier this month to allegations from the Securities and Exchange Commission that he made misrepresentations to investors as part of the perpetration of a “Ponzi-like” scheme.

The Jay Peak CEO says he needs more time to negotiate a settlement with the SEC.

On Thursday, his attorney Stephanie Casey asked for an extension until Sept. 9.

Casey writes that a settlement would obviate the need for Stenger to file a response to the SEC’s complaint and “conserve resources.”

The SEC and the receiver, Michael Goldberg, do not oppose the motion.

This latest request for an extension is the third since the SEC brought charges against Stenger and his partner, Ariel Quiros, on April 12.

Stenger has been cooperating with the SEC over the past four months and remains a fixture at the resort where he issues memos to staff, ushers guests and potential new investors around and draws a $100,000 a year salary. In addition, he uses a condo at Jay Peak, drives a luxury Audi paid for by the resort, and fills up his gas tank with company petrol. Two of his sons, Jaime and Andy, work at the resort in management positions. Andy Stenger was recently promoted to head of facilities; Jaime Stenger is the director of the golf and retail operations.

Stenger and Quiros are accused of misusing $200 million in EB-5 immigrant investor funds. The SEC says Quiros stole more than $55 million. The two developers received $440 million in investor funds for eight projects, including the Burke Hotel, and administrative fees from immigrants.

Stenger has told the press he didn’t think he did anything wrong; Quiros is fighting the allegations in court.

In exchange for a $500,000 investment (plus a $50,000 administrative fee), EB-5 investors were promised temporary green cards and eventual permanent residency. More than 700 investors from 74 countries have been allegedly defrauded and more than half have not yet received permanent green cards because two major projects were not completed.

The SEC alleges that Quiros “masterminded” the scheme “with substantial assistance from Stenger.”

Stenger was the front man for the alleged fraud. He was the general partner for eight limited partnerships associated with projects at the Jay Peak and Burke resorts and a proposed biomedical facility in Newport. In that role, he marketed the projects overseas, solicited investors and handled all communications with the immigrants.

As general partner for the limited partnerships with immigrant investors, Stenger had a fiduciary duty to protect the interests of the investors, but a deposition with the SEC shows the Jay Peak CEO was directly involved in actions that put investor funds at risk.

The investors believed their money was held in escrow, and Stenger never made them aware of risky financial transactions, such as margin loans and comingling of funds to backfill projects.

All the while, Stenger continued to make “materially false statements,” the SEC says, to solicit new investors to the projects right up until the SEC brought charges. Stenger and Quiros have been charged with 52 counts of fraud in the SEC case and 15 counts in the state case.

Stenger’s involvement in the fraud has not been fully explained. He largely avoided the spotlight in federal district court when SEC litigators brought their case against the two Jay Peak developers in documents and hearings about the alleged misuse of immigrant investor money in six development projects at Jay Peak Resort and a biomedical center in Newport.