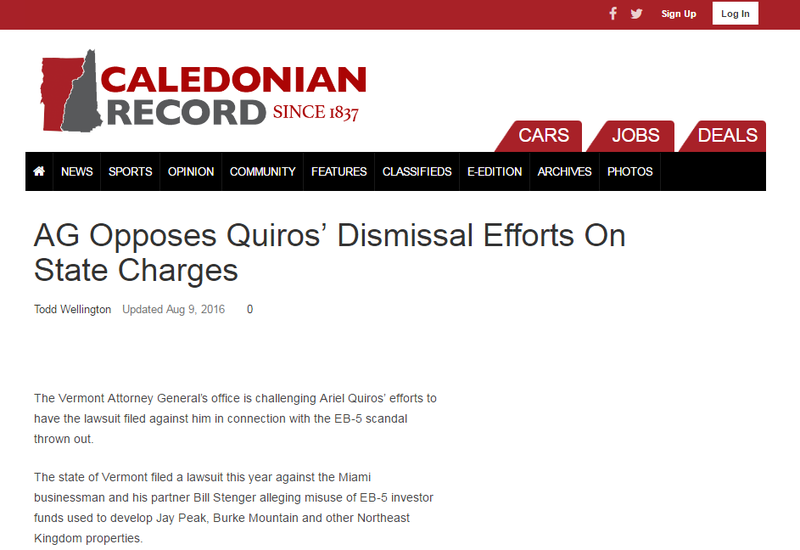 The Vermont Attorney General’s office is challenging Ariel Quiros’ efforts to have the lawsuit filed against him in connection with the EB-5 scandal thrown out.

The state of Vermont filed a lawsuit this year against the Miami businessman and his partner Bill Stenger alleging misuse of EB-5 investor funds used to develop Jay Peak, Burke Mountain and other Northeast Kingdom properties.

Quiros responded last month with a motion to dismiss asking the court to throw out the case arguing that it lacks substance, is legally flawed and seeks to punish him for offenses that amounted to “little more than grounds for a potential partnership dispute between private parties.”

“Quiros’ claim that the ‘allegations, if true, would be the stuff of everyday private commercial disputes’ is patently untrue,” reads the state’s response. “To the contrary the state’s enforcement action alleges a massive public fraud in which, for a decade, Quiros masterminded a wide-ranging investment scheme to defraud investors participating in the EB-5 investor program…Quiros’ motion to dismiss fundamentally misunderstands securities and consumer protection law.”

Quiros and Stenger are also both the subject of a federal complaint filed earlier this year by the Securities and Exchange Commission (SEC) alleging misuse of EB-5 investor funds used to develop Jay Peak, Burke Mountain and other Northeast Kingdom properties.