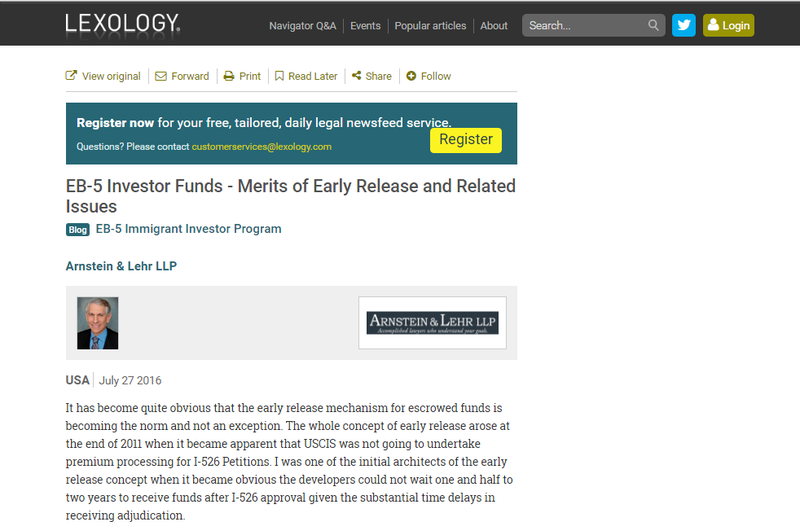 It has become quite obvious that the early release mechanism for escrowed funds is becoming the norm and not an exception. The whole concept of early release arose at the end of 2011 when it became apparent that USCIS was not going to undertake premium processing for I-526 Petitions. I was one of the initial architects of the early release concept when it became obvious the developers could not wait one and half to two years to receive funds after I-526 approval given the substantial time delays in receiving adjudication.

Since that time, the industry has evolved and come up with may complicated options related to the early release concept which will be discussed below.

A whole new industry arose based upon the early release concept involving I-526 insurance which in a nutshell provides the immediate refund of a denied investors capital contribution amount by an insurance company who in effect takes the place of the investor in the NCE by providing funding for the investor as well as enabling the developer to receive all escrowed proceeds without any holdback fund. Of course, this insurance comes at a cost which may vary depending upon who is the provider. Typically, these insurance policies have three outs which include the following:

Another seldom used concept of overcoming extensive time review process is the seeking of expedited review, which is rarely granted but has been utilized in certain cases. Click here for an article addressing one such case which had a significant governmental benefit that supported the expedited review petitions filed in order that the developer can access to funds in a much quicker basis without needing to address the early release concept.

This area has and will continue to evolve as new financial models are developed.