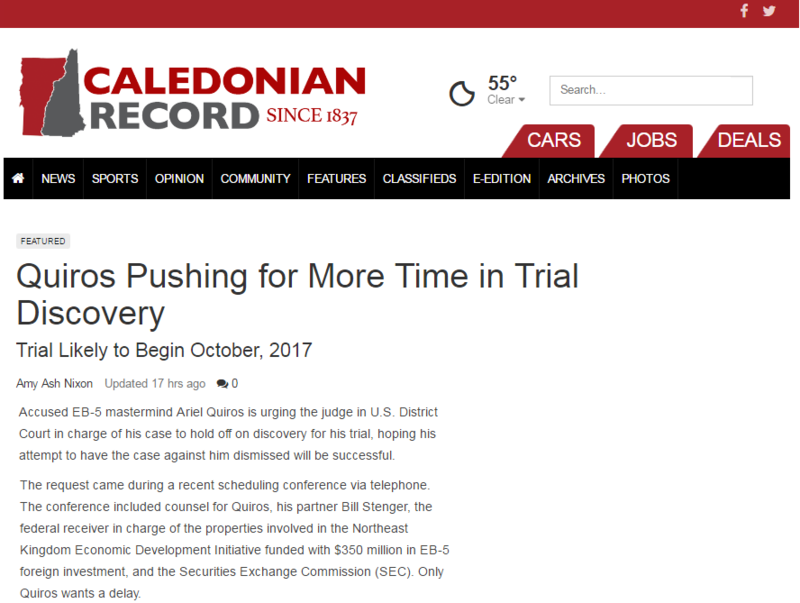 Accused EB-5 mastermind Ariel Quiros is urging the judge in U.S. District Court in charge of his case to hold off on discovery for his trial, hoping his attempt to have the case against him dismissed will be successful.

The request came during a recent scheduling conference via telephone. The conference included counsel for Quiros, his partner Bill Stenger, the federal receiver in charge of the properties involved in the Northeast Kingdom Economic Development Initiative funded with $350 million in EB-5 foreign investment, and the Securities Exchange Commission (SEC). Only Quiros wants a delay.

The SEC, Stenger and federal receiver Michael Goldberg all agree that the discovery process should get underway immediately for a trial expected to begin in October 2017.

Quiros and Stenger are implicated in an alleged Ponzi-like scheme dating to 2008 in their EB-5 funded projects mostly at Jay Peak Resort, but also at Burke Mountain.

They are accused of misappropriating $200 million and Quiros is further accused of skimming another $50+ million from the pool of investor money to buy for himself two luxury New York City condos among other luxury investments, to pay personal income taxes and more.

The State of Vermont has filed a complaint in Washington Superior Court which mirrors the federal fraud allegations.

In the recent filing in U.S. District Court in the case, Quiros is urging that the trial discovery wait until after his motion to dismiss the SEC’s amended complaint is acted on; he has argued that the statute of limitations has been exceeded in much of the claim’s basis, and that he did not misrepresent the projects in securities offerings to investors. He is likewise seeking to have the state’s claims in Barre dismissed, using the same argument.

The SEC, Stenger and the receiver agreed during the conference that initial disclosures should be made not later than Aug. 19, and that discovery should be limited to March 24.

Quiros, in the scheduling conference, argued through his counsel that the SEC has had a three-year jump start in amassing its evidence in the case against him, including depositions, interviews and extensive document discovery.

“By contrast…Mr. Quiros and his lawyers will need a reasonable opportunity to conduct discovery regarding the relatively complicated factual matters in this matter from third-parties, including some third parties located in foreign countries and entities now subject to the Receivership,” the testimony from the scheduling conference goes on. His attorneys said he may need more than nine months if his motion to dismiss is not granted in the case.

According to the transcript, Quiros insists that “…the receiver is in possession of documents covered by the attorney-client privilege held by Mr. Quiros, and certain attorney product prepared by Mr. Quiros’ attorneys.” Quiros is asking they be returned “forthwith, and that the receiver destroy any copies.

The information notes that the SEC is in settlement discussions with Stenger, and the receiver on behalf of the corporate entities, and a settlement is expected to be reached.

The SEC also anticipates discussing settlement possibilities with Quiros, but notes, the Commission “…do not believe settlement at this time is likely.”