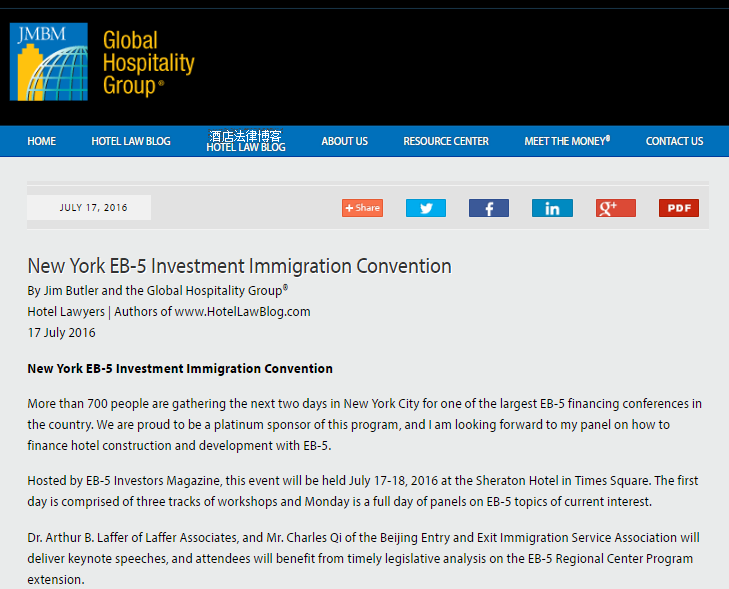 More than 700 people are gathering the next two days in New York City for one of the largest EB-5 financing conferences in the country. We are proud to be a platinum sponsor of this program, and I am looking forward to my panel on how to finance hotel construction and development with EB-5.

Hosted by EB-5 Investors Magazine, this event will be held July 17-18, 2016 at the Sheraton Hotel in Times Square. The first day is comprised of three tracks of workshops and Monday is a full day of panels on EB-5 topics of current interest.

Dr. Arthur B. Laffer of Laffer Associates, and Mr. Charles Qi of the Beijing Entry and Exit Immigration Service Association will deliver keynote speeches, and attendees will benefit from timely legislative analysis on the EB-5 Regional Center Program extension.

In the middle of a pivotal year

With the Conference opening tomorrow, conference founder Kamyar Amiri-Davani described some of the critical issues facing the EB-5 industry at this mid-point in 2016:

We’re in the midst of a pivotal year for the EB-5 program. Industry consensus is that greater integrity and investor protection measures, as well as reform of the current TEA designation system, is needed. We hope that this conference will further enhance connections among developers, EB-5 lenders and service providers, and most importantly, to promote an enhanced EB-5 Regional Center Pilot program that Congress will extend for a significant period of time.

EB-5 Investors has hosted eleven major EB-5 conferences, including the two biggest annual conferences in the U.S. in Las Vegas and Southern California.