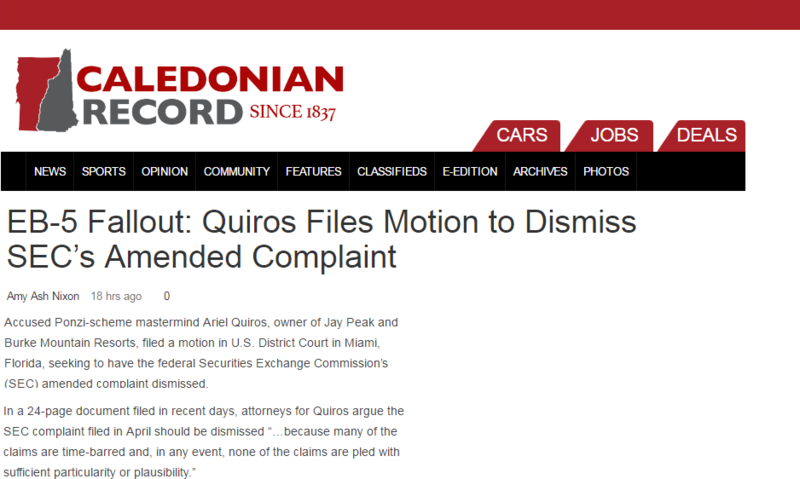 His lawyers seek several other reprieves, including that it be “substantially revised” in keeping with a recent SEC case before the 11th Circuit “…which provides that the SEC cannot bring claims for disgorgement, restitution, penalties, or any other monetary relief regarding offerings that occurred more than five years prior to filing of the initial complaint in this action.”

Quiros is accused, with his partner, Bill Stenger, of misappropriating more than $200 million in immigrant investor funds in the Northeast Kingdom Economic Development Initiative the pair proposed. Their plans promised thousands of jobs through various developments.

Quiros is also charged with skimming another $50 million from investor funds and using the money to pay for two luxury New York City condos, personal income taxes, and to fund what the SEC attorneys have characterized as a lavish lifestyle.

The investments which fueled the projects came through the federal EB-5 investor program through which immigrant investors posted $500,000 apiece and would later receive green cards once the promised jobs were realized. More than 700 of those investors are at risk of not gaining green cards.

Attorney Karen Stetson, filing the motion for Quiros, states that the SEC, following a three-year investigation, “The SEC remains unable to provide a factually and legally coherent theory for Mr. Quiros’ s liability.”

“Not only does it rely on conclusory labels (e.g., ‘systematic looting,’ ‘pilfering,’ ‘fraudulent scheme,’ ) rather than reasoned analysis, but it also repeatedly mischaracterizes alleged breaches of contract (with investors) as misrepresentations or omissions related to securities offerings,” argues Stetson. “There is a simple reason for the SEC’s inadequate pleading: Mr. Quiros played no role in selling or marking any securities to any investor. For this reason, the Court should dismiss the SEC’s claims against Mr. Quiros.”

Stetson’s motion continues, stating that the complaint does not reference misrepresentations or omissions allegedly made at the time of the offerings, “but conduct occurring after the offerings. The SEC says that Mr. Quiros moved investor money and used margin loans inappropriately. While the implication is that Mr. Quiros acted in violation of applicable agreements, there is no pleading of facts supporting even this conclusion.”

“The SEC does not allege that Mr. Quiros had any involvement in preparing, issuing, or disseminating any of the offering documents,” in the seven partnerships involved in the allegedly fraudulent scheme Quiros is accused of masterminding, the motion goes on.

Stetson comes back to the statute of limitations, insisting that it has run its length of time in “most of the SEC’s claims.”

An effort to obtain comment from Michael Goldberg, the court-appointed receiver in charge of the assets involved, was not successful by press time on Tuesday.