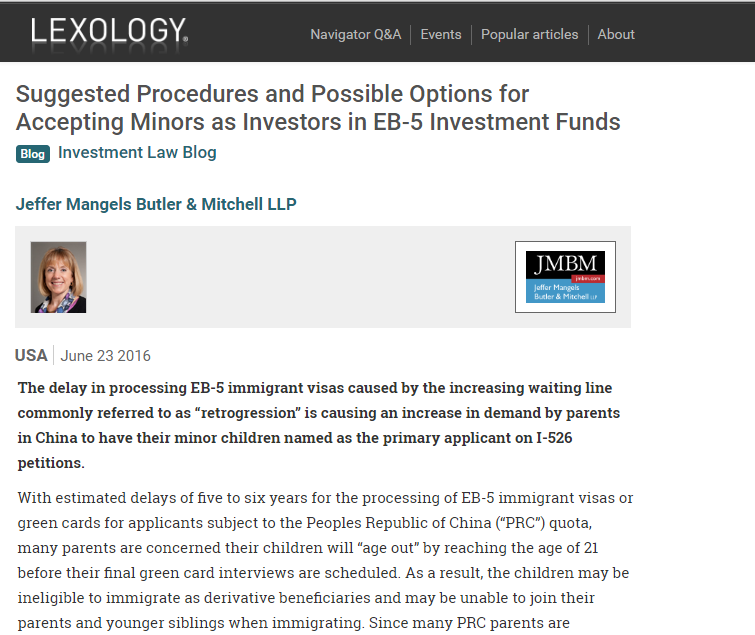 The delay in processing EB-5 immigrant visas caused by the increasing waiting line commonly referred to as “retrogression” is causing an increase in demand by parents in China to have their minor children named as the primary applicant on I-526 petitions.

With estimated delays of five to six years for the processing of EB-5 immigrant visas or green cards for applicants subject to the Peoples Republic of China (“PRC”) quota, many parents are concerned their children will “age out” by reaching the age of 21 before their final green card interviews are scheduled. As a result, the children may be ineligible to immigrate as derivative beneficiaries and may be unable to join their parents and younger siblings when immigrating. Since many PRC parents are primarily motivated to obtain green cards under the EB-5 Program for the benefit of their children, these parents are requesting EB-5 investment funds to accept their minor children as investors, so that the child can file the I-526 petition as the principal applicant.

There are immigration issues, including the ability of a minor to fulfill management responsibilities to the extent required, and whether the investment funds of a minor investor are irrevocably committed to the EB-5 investment fund, that have not yet been considered by USCIS, because until now there has been no need to have the derivative child file as the principal applicant. On the positive side, USCIS allows only “children age 13 or younger” to file a Form I-485 Application to Register for Permanent Residence or Adjust Status paying the reduced fee for children, while persons aged 14 and over must file the full adult fee for the Form I-485 application. In addition, USCIS has accepted minor children as principal applicants in other Employment Based (EB) categories such as for EB-1A extraordinary ability aliens.

Chinese law may allow minors to legally sign subscription agreements with EB-5 investment funds with the consent and co-signature of their parents.

EB-5 investment funds may select PRC law as the governing law for purposes of execution of a subscription agreement and other legal documents required for an EB-5 investment, to permit the parent or legal guardian to co-sign the documents on behalf of a minor investor.

EB-5 investment funds could alternatively consider allowing parents to make a gift to a minor investor under the Uniform Gifts or Transfers to Minors Act that applies under state laws of the United States.

If EB-5 investment funds do not wish to rely on PRC law to accept minor investors, another possible option might be to use the Uniform Gifts or Transfers to Minors Act that is in effect in the state where the EB-5 investment fund is located, and select that state’s choice of law for purposes of execution of the subscription agreement. A similar version of this Act has been adopted in every state within the United States. This Act allows any person to make a legal gift of any form of property or cash to a minor, without the adoption of a formal trust agreement. The Act provides that the person making the gift, who is normally the custodian of the property that is gifted to the minor, will control the property until the minor reaches the age of majority, which is normally either the age of 18 or 21, at which age the minor automatically becomes the control person of the property. The only requirement for the gift is that the instrument that confers the gift contain the appropriate language specified by the applicable state Act, which is normally stated as “[Name of Custodian”] as custodian for [Name of the Minor] under the [Name of State] Uniform Gifts [or Transfers] to Minors Act.” There may be some reluctance to use this alternative because the name on the Subscription Agreement will be both that of the Custodian and the Minor, and this may create a greater risk of denial of the I-526 petition. To our knowledge, no reported I-526 immigrant petition has been filed using the Uniform Gifts or Transfers to Minors Act, but this may be due to the fact that the age out issue did not become a serious concern until the retrogression policy was announced commencing in May 2015. It would be difficult to use both this method and the PRC law method of subscribing for an EB-5 investment, because each method would require a different choice of law and a different method of signing the subscription agreement.

EB-5 investment funds may need to accept minor investor subscription funds outside of escrow unless the escrow bank approves the acceptance of minor investors.

These suggested procedures are new and untested, and as such there are risks that they may not work as intended.

Since the Chinese quota or waiting line only emerged in May 2015 as a result of a surge in demand from Chinese applicants, who still represent over 80% of EB-5 investors, this area is evolving. As is the case with respect to many other issues in EB-5 investing, there are uncertainties as to whether these procedures will be accepted by USCIS, or by courts in the event of a dispute. The USCIS has indicated they are preparing regulations which hopefully will address this issue. Until such regulations are adopted, there are risks to EB-5 investment funds and to parents and minors who seek to use these procedures as a means of making an EB-5 investment and applying for a visa under the EB-5 program. The alternative is for EB-5 investment funds to accept only those investors who can legally enter into contracts under the governing law of the applicable state, but in that case the parent and the minor will retain the risk that the minor will age out before the parent is able to obtain the visa. This problem could be better solved if Congress amends the Child Status Protection Act [8 U.S.C. 1153(h)] to freeze the child’s age as of the date of filing, rather than merely allowing the child to deduct the time the petition was pending from their actual age. With the September 2016 sunset of the EB-5 regional center program, Congress has a perfect opportunity to amend the law to protect children from aging out.

While it is possible that USCIS may establish a bright line cut-off age for principal EB-5 immigrant visa applicants, it is likely that each case will be evaluated on a case by case basis providing an opportunity for EB-5 investment funds and their counsel to structure a framework that complies with state and federal law. Presently it appears unlikely that it would be necessary to file with a primary applicant “age 13 or younger” as these children are likely to be derivatively eligible for immigration benefits. Since USCIS has articulated age 14 as a cut-off age for payment of the children’s filing fee when applying to Register for Permanent Residence or Adjust Status, it would make sense to establish a transparent bright line test that investors can use when making the commitment of funds in order to obtain a green card.