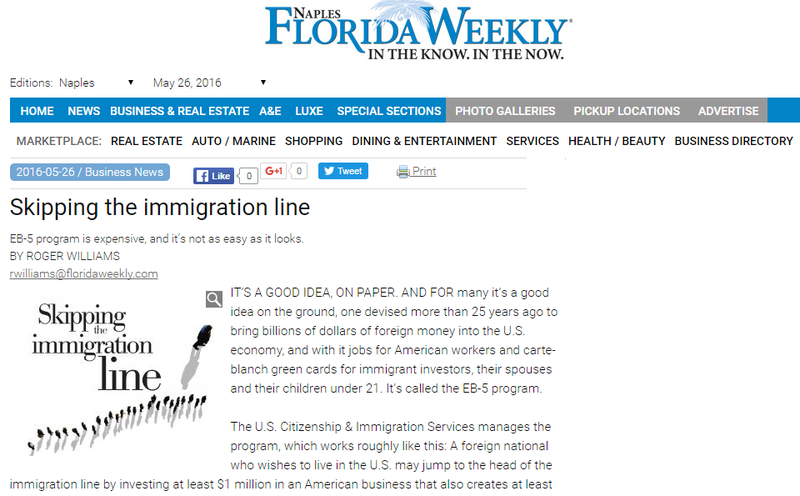 IT’S A GOOD IDEA, ON PAPER. AND FOR many it’s a good idea on the ground, one devised more than 25 years ago to bring billions of dollars of foreign money into the U.S. economy, and with it jobs for American workers and carte-blanch green cards for immigrant investors, their spouses and their children under 21. It’s called the EB-5 program.

The U.S. Citizenship & Immigration Services manages the program, which works roughly like this: A foreign national who wishes to live in the U.S. may jump to the head of the immigration line by investing at least $1 million in an American business that also creates at least 10 jobs, or by investing at least $500,00 in a business that creates those jobs in a “targeted employment area,” which means a less prosperous city, county or region.

Each state has regional centers — self-appointed by business interests themselves to pool investor money, but approved, though not regulated or only loosely regulated, by the government’s USCIS. Those centers track or collect investment-needy businesses and can point immigrant investors to them. Florida, for example has 85 of the nation’s nearly 850 regional centers, including a Palm Beach Regional Center that works through counties from Palm Beach to Charlotte; the Florida Equity & Growth Fund Regional Center out of Tampa that targets 23 Florida counties the center defines as “the high-tech corridor” of the state; and Florida Overseas , a center that “specializes in investment opportunities in Targeted Employment Areas statewide in 12 diverse industry clusters,” according to its online literature.

Numbers provided by the government and compiled and reported by media outlets show that the program jumped from less than 100 EB-5 visas provided 13 years ago to more than 9,000 last year — 80 percent of those to Chinese investors.

In Florida those investments have boosted the bottom line in a wide range of projects, including such restaurants as Tap 42 in Boca Raton and Twin Peaks in Fort Myers.

They have been good for many, including Anthony Korda, a Neapolitan attorney and partner in the firm KordaBurgess who works with EB-5 investors still.

“I am an immigrant who came to the U.S. using the EB-5 program,” he explained in an email. “My family and I are all now U.S. citizens but we were all born in the UK (Great Britain). We invested in a ski resort project in Vermont. We love living in the U.S. and knew that we would stay. My family and I decided to become U.S. citizens because we had made our home here and wanted to show our allegiance to our new home country.”

But the centers, and indeed the entire process managed by USCIS, have come under closer scrutiny and significant criticism lately as charges of fraud and poor management have been aimed at some projects.

American front men in Vermont, for example, allegedly took hundreds of millions in money from foreign investors enlisted in EB-5, then failed to create the resort businesses they promised, putting them in civil or criminal hot-water and creating victims of the investors. Mr. Korda’s investment there paid off in his green card and the eventual citizenship of him and his family, but others did not, he says:

“I was one of the first investors in that project (and) I cannot comment beyond that as far as it affects me personally.”

The matter is in litigation, he explains.

“However, a number of investors (there) have been placed in a precarious position as far as their immigration status is concerned, far beyond the obvious financial implications. This is a serious blow for the EB5 industry, particularly as the Regional Center Program expires in September of this year and will be awaiting renewal.”

But the bad apple should not despoil the barrel, he concludes.

“Most EB-5 projects are offered by honest developers who deliver the immigration benefit promised by creating jobs for the U.S. economy. Although there have been examples of fraud (as in every industry), such examples are still relatively rare. I hope that the innocent investors who have done everything expected of them will not be made to pay the price for the alleged misdeeds of others on whom they relied.”

The Department of Homeland Security has also expressed public concern that the program could be used by spies from both China and Iran.

Michael Gibson, an investment advisor and managing director of the Miamibased USA Advisors (USAadvisors.org), a firm that provides specific advice on the EB-5 program and researches opportunities for investors, told The New York Times this month that Brazilian investors moving their money from that troubled country into an Orlando soccer stadium whose Brazilian developer sought the support of his wealthy countrymen should be more cautious.

If the “cash flow” changes because teams don’t win, he explained, the investors might lose not only their money, but their visas.

Mr. Gibson later described his view of the program to Florida Weekly, this way: “This program has increased in popularity exponentially every year. But since USCIS is not transparent, we don’t know how it’s being managed.

“The problem with the entire industry is USCIS. They are completely nontransparent in terms of which projects they approve, how many jobs they create, and who is behind the capital.”

That shouldn’t dissuade any investors from the program, he added, but it should make them hire investment advisors — not rely on immigration attorneys or the regional centers alone, for advice.

Although the program now limits visas administered to 10,000 per year — and Obama administration officials have claimed that it provided more than $8.5 billion and more than 35,000 jobs in a five-month period beginning last fall (those numbers are questioned by skeptics) — the program should be expanded, Mr. Gibson insists. But only if it becomes transparent.

“Why would the USCIS not do everything in its power to take steps to reduce the incidence of potential fraud?” he asks.

“I have no idea why they don’t release information. They don’t even say who are the owners of regional centers. You’d want to know if they had any prior felonies, any bad investments, that kind of thing.

“Up until now foreign investors have relied on immigration attorneys. But they’re just as much in the dark as anybody else. They look at the immigration track record of regional centers, but the funny thing about that is, there is no way to verify if what regional centers claim, is true.” ¦

Anthony Korda, partner in KordaBurgess PA, of Naples, sat down to offer a personal view of EP- 5 to Florida Weekly.

Q. Is this program becoming more popular here in the region?

A. “The success of the program cannot be overstated. It is, if anything, oversubscribed because of the numerical limits on investor visas, which are restricted to 10,000 annually. This includes the investor and all family members, so that there are approximately 2,500 to 5,000 families depending on size who will become conditional residents. More than 89 percent of all investors are Chinese and so visa wait times were imposed last year to restrict the number of visas that can be issued to Chinese nationals. However, there is a major backlog so that long delays are being experienced. Nevertheless, the program remains successful and there are a large number of EB-5 Regional Centers in Florida. Of 834 total, 85 are in Florida and are attracting investors to a large number of different projects.”

Q. Who in the region has taken advantage of EB-5 so far?

A. “This will tell you how to contact the Regional Center and they in turn will be able to tell you about their projects. One example of a local EB-5 project is the Twin Peaks restaurant in Fort Myers, developed with EB-5 investor funds.” uscis.gov/working-united-states/permanent-workers/employment-based-immigration fifth-preference-eb-5/immigrant-investor-regional-centers

Q. What is your experience with EB-5?

A. “I am an immigrant who came to the U.S. using the EB-5 program. My family and I are all now U.S. citizens but we were all born in the UK (Great Britain). We invested in a ski resort project in Vermont. We love living in the U.S. and knew that we would stay. My family and I decided to become U.S. citizens because we had made our home here and wanted to show our allegiance to our new home country.”

Q. Is the EB-5 program working as efficiently as it should be, in your opinion?

A. “There is clearly room for improvement and although this is a complex and detailed subject, here are some bullet points:

“3. More visas need to be made available or each family should count as one.

“4. More regulation and oversight is required to ensure that projects deliver and are able to repay the investors.

“5. The ‘at risk’ provisions need to be reconsidered so that investors can be repaid once the jobs have been created and sustained for the required period.

“6. USCIS should provide more clarity as to the requirements of the program and how they interpret the regulations.”

Q: Is this program fair and should we (we Americans, we Floridians) be using it?

“The program is certainly fair to the U.S., but improvements should be made to make it more fair to investors.”