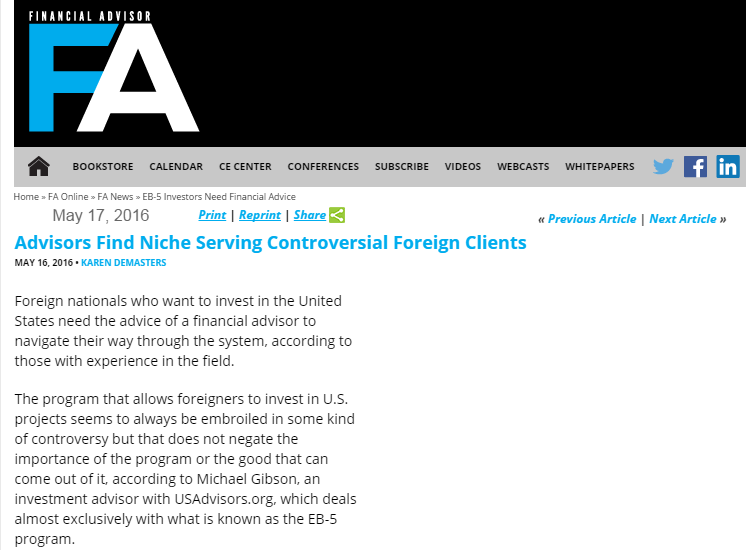 Foreign nationals who want to invest in the United States need the advice of a financial advisor to navigate their way through the system, according to those with experience in the field.

The program that allows foreigners to invest in U.S. projects seems to always be embroiled in some kind of controversy but that does not negate the importance of the program or the good that can come out of it, according to Michael Gibson, an investment advisor with USAdvisors.org, which deals almost exclusively with what is known as the EB-5 program.

But the EB-5 program, which was created by Congress in 1990, has been rife with scandal and is frequently the subject of Congressional hearings.

The most notorious scandal, but not the only one by far, is the ongoing problem with the Jay Peak commercial and sky resort development in upstate Vermont. The project has been under investigation because of the alleged disappearance of millions of dollars and the lack of evidence that it could ever be a profit-making venture.

The EB-5 program was created to encourage investment in projects in the United States to create jobs and in turn to grant residency to investors, most of whom come from China and Russia. Investments of $500,000 or $1 million are required to qualify, depending on where the project is located, and a certain number of jobs have to be created.

But the projects and finances often lack transparency, which can cause problems for the investor, says Gibson. And that is what creates the need for the investor to have outside, unbiased advice.

“I started in this work because I met an immigration attorney who had a client with five investment choices under the EB-5 program. I helped evaluate the choices and made a recommendation and it sort of grew from there,” he says.

Projects are arranged by regional centers located throughout the United States and the investor often relies on the center and the immigration attorney for information. However, an unbiased source of advice from a fiduciary is needed to guide the investor, Gibson says.

“This is a great niche market for an advisor who is willing to do the research necessary to understand the EB-5 program and the projects involved,” Gibson says. “There are some broker-dealers who are involved, but very few financial advisors.”