Contrary to Claim, Leahy Has Taken $34K Worth of Free Travel 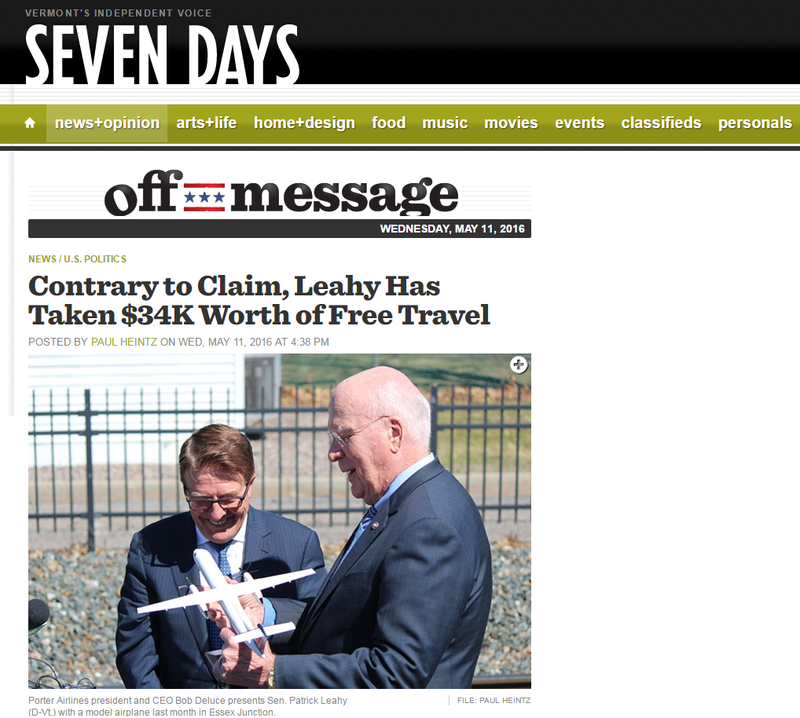 Earlier that day, the Pomfret businessman had called on Leahy to "come clean" on his involvement with the federal EB-5 investor visa program, which is at the heart of a massive fraud scandal rocking the Northeast Kingdom. Among Milne's requests was for an accounting of any flights the senator had taken with the accused — Jay Peak principals Ariel Quiros and Bill Stenger — and various government officials.

Leahy told reporters that he had appeared at EB-5 investor-recruitment events abroad, but that he had not gone out of his way to do so.

"On some of my official travel for other things, they’ve had some meetings I’ve dropped by, but I’ve not done an EB-5 trip," Leahy said, according to VTDigger.org.

Then he went a little further: "I’ve done that with companies that have done business on military matters and others, but no, I [have not], nor have I ever had any business in my 40 years here pay for any of my travel."

Members of Congress are required to disclose all travel financed by private interests. According to filings dating back to 2000 and made available by the nonpartisan congressional tracking firm LegiStorm, Leahy has accepted at least $34,433 worth of free travel.

Some of his trips were financed by those with business before the Senate. In June 2007, for example, Warner Brothers Entertainment flew Leahy and his wife, Marcelle, to Chicago to film an appearance in Batman: The Dark Knight. The company spent $2,011 on transportation and $1,108 on lodging, according to a disclosure form.

In July 2002, the boutique investment bank Allen & Company spent $2,818 to send the couple to its annual conference in Sun Valley, Idaho. Records show that Leahy was scheduled to speak on a panel there focusing on HIV-AIDS. In January of that year, the Consumer Technology Association sent the Leahys on a three-day trip to Las Vegas for the trade group's annual Consumer Electronics Show.

The senator's most expensive privately financed trip came in November 2004, when the Center for Strategic & International Studies spent $15,503 for the two to travel to Paris for three days. There, according to the records, Leahy was scheduled to participate in a "high level dialogue entitled 'The Future of the U.S.-French Security Relationship.'"

In addition to Leahy's own expenses, his staffers racked up another $14,761 worth of privately financed travel — sometimes accompanying the senator and sometimes going it alone. Those trips were financed by such entities as Microsoft, Harvard Law School, the American Council on Germany and the Technology Policy Institute.

Asked why Leahy had claimed he had never accepted free travel, spokesman David Carle said, "He was mistaken."

"The travel question was in the context of EB-5, and he did not have any EB-5 related trips paid for by business interests," Carle continued. "But over the course of his career he has had some travel sponsored by organizations and foundations, which are a part of the public record."