Without significant reforms, EB-5 program should die off 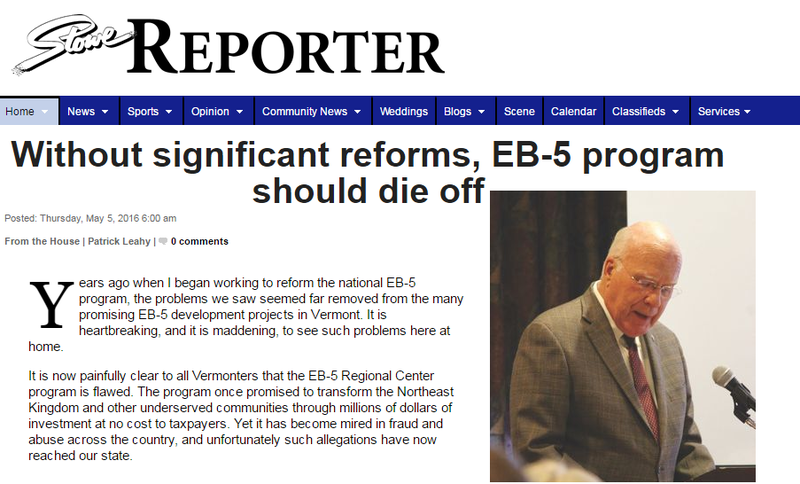 Years ago when I began working to reform the national EB-5 program, the problems we saw seemed far removed from the many promising EB-5 development projects in Vermont. It is heartbreaking, and it is maddening, to see such problems here at home.

It is now painfully clear to all Vermonters that the EB-5 Regional Center program is flawed. The program once promised to transform the Northeast Kingdom and other underserved communities through millions of dollars of investment at no cost to taxpayers. Yet it has become mired in fraud and abuse across the country, and unfortunately such allegations have now reached our state.

I have championed the EB-5 program and worked to reauthorize it for many years. I saw its potential to promote economic development and create jobs in urban poor and rural communities. And, in fact, we have seen the program succeed in Vermont.

Country Home Products, which employs more than 200 Vermonters in designing and building power equipment, used EB-5 to shore up its business during the height of the Great Recession. Similarly, Sugarbush credits EB-5 with helping the mountain return to profitability and preserve hundreds of jobs. But the program that exists today has strayed from these worthwhile policy goals.

Long before there were concerns in Vermont, I began leading efforts to fix EB-5. In 2011, I began working on legislation to improve its integrity with the agency that oversees the program, the Department of Homeland Security. In 2012, Sen. Grassley, R-Iowa, and I wrote to Homeland Security, expressing our concerns about the potential for certain abuses of the program. Reports of significant EB-5 fraud in other states soon followed, including a massive $150 million scheme in Chicago. It was clear the program needed improvements.

In May 2013, I successfully added an EB-5 reform amendment to the comprehensive immigration reform bill that provided for increased financial reporting, background checks, termination authority and securities oversight. For the next 18 months I pressed the House of Representatives to take up the bill, but House leaders refused to even allow a vote.

My concerns about the EB-5 program have only multiplied since then. I have heard complaints of unscrupulous EB-5 middlemen abroad. Some have described investor recruitment as “the Wild West.” Others have boldly claimed that U.S. securities laws do not apply to EB-5 offerings overseas. Not surprisingly, EB-5-related SEC enforcement actions soon became commonplace.

In January 2015, I joined Sen. Grassley in requesting a Government Accountability Office audit of EB-5 that revealed fraud vulnerabilities and questioned its economic impact. Separate reports from Homeland Security’s Office of Intelligence and Analysis and Office of the Inspector General highlighted additional issues. Homeland Security does deserve credit for making administrative improvements to EB-5, but Secretary Jeh Johnson made clear in a letter to both Sen. Grassley and me that several necessary enhancements require congressional action.

Even when there is no indication of fraud, the incentives Congress established to invest in rural and poor areas are routinely abused. Today, mega-developers in the most affluent cities dominate the EB-5 market and are reluctant to change the status quo. This has only made it more difficult to meaningfully reform EB-5 in Congress, but it has not deterred my commitment to reform.

Last year, I co-authored an EB-5 reform bill with Sen. Grassley that addressed just about every program flaw that we could identify. Our bill requires that Homeland Security conduct a more thorough vetting of proposed projects and establish an EB-5 Integrity Fund to conduct audits and mandatory project site visits. It forces developers to disclose additional business risks and conflicts of interest, expose the myriad of opaque fees paid to EB-5 middlemen, and provide investors with greater protections if a project fails. It also raises investment thresholds and restores incentives to invest in rural and high unemployment areas. I said at the time that the additional oversight, security enhancements, and anti-fraud provisions provided a much-needed overhaul of the program.

Our reforms had the support of the top leaders on the House Judiciary Committee, as well as Homeland Security and the civil rights community that wants to see the incentives to invest in underserved areas restored. We pushed hard to enact our bipartisan proposal, and we told the Senate’s leadership we would not support any extension without these broad reforms.

But big-city developers viewed our reforms as a threat to their bottom line, and they worked aggressively to block our efforts. Unfortunately, leaders in Congress sided with the developers and extended the program without reform.

It is a fair question whether a program that faces such daunting challenges should even be extended at all. I still believe that, if meaningfully reformed, EB-5 can promote development and create jobs in areas that desperately need both. Attracting significant investment is all but impossible in many communities. If functioning properly, EB-5 can help fill that niche, as it did with Sugarbush and Country Home Products.

But the EB-5 program today no longer functions as intended. Absent fundamental changes, I believe the time has come for it to end.

No one knows both the promise and the shortcomings of EB-5 better than the hardworking people of the Northeast Kingdom. As they did, I believed projects at Jay Peak and Q Burke ski areas and in the Newport area could bring transformational economic development to a corner of our state that has struggled economically. Because of its potential to create jobs in rural states like Vermont, I will continue to fight for meaningful EB-5 reform. But without such reform, I will not support extending the Regional Center program again.

The people of our state deserve better than to blindly extend a program we know is flawed.