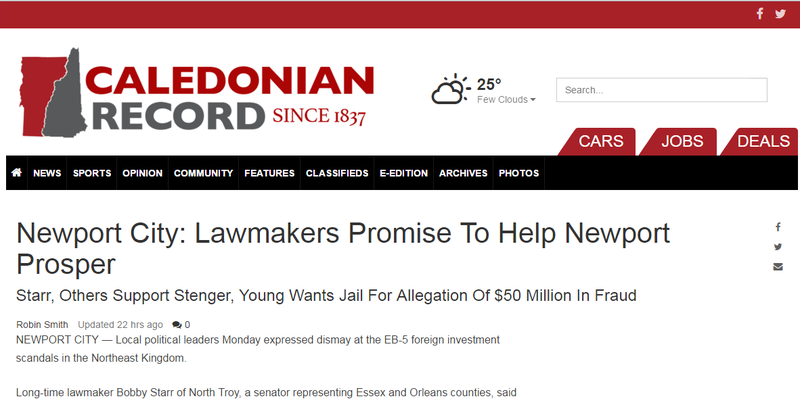 Long-time lawmaker Bobby Starr of North Troy, a senator representing Essex and Orleans counties, said at Monday’s Legislative Breakfast that the information about the scandal and lawsuits as presented at the now-infamous April 14 press conference by the governor was news to him.

“None of us legislators knew about it,” Starr said, addressing the hottest topic of the year at the monthly breakfast at the East Side Restaurant.

Starr said he and others in the NEK delegation were asked to attend the press conference and listened with an “upset stomach” as he heard about the alleged fraud and misuse of millions of dollars at Jay Peak and Q Burke resorts and elsewhere.

Rep. Sam Young, D-Glover, said he was shocked “at the scale of it” when he heard about the lawsuits. Stenger was accused of facilitating fraud of $50 million and misuse of up to $200 million by his partner, Ariel Quiros of Florida, in what prosecutors called a Ponzi scheme. All the properties are in court-ordered receivership, managed to preserve the assets while the lawsuits progress.

Starr and Young called Jay Peak Resort a real asset to the region. Starr said he looks forward to seeing the end of the lawsuits by the state and federal authorities over the EB-5 projects.

The lawsuits and unveiling of allegations of fraud and misuse of funds stopped plans for a bio-tech plant in Newport City and have left a whole city block in downtown vacant without hope of a future hotel.

The downtown block concerns Young. “I will do whatever I can to help get what Newport wants and needs downtown,” Young said.

Starr and other lawmakers along with Mayor Paul Monette met last week with the governor and top administrators. Starr said they want to help Newport City prosper.

“I think as an area we have to think positive and and hope everything will turnout well,” Starr said.

Starr, a one-time school board member, representative and now senator, said he worked with Stenger for decades over sewer projects, environmental permits and road upgrades for Jay Peak.

“Never once did I get led astray or told anything by Bill that wasn’t accurate,” Starr said.

Starr called Stenger “an honorable, straightforward person” who “might be guilty of having the wrong friends.”

Starr credited Stenger for working for a year to encourage the voters to see the benefit of expanding the career center next to North Country Union High School rather than locating it in Derby as was being considered.

Young was frank about how he felt about the allegations of fraud. “I think someone should go to jail,” Young said, for stealing $50 million.

He said he saw the governor more in the press conference on the EB-5 scandal two weeks ago than he has all year, noting that there is relatively little activity in the Legislature this year.

There is going to be such turnover in leadership in statewide and legislative offices that the next session will be very exciting, Young said.

In other legislative developments, Rep. Vicki Strong, R-Albany, on the House Judiciary Committee, said she supports work on a special drunk driving and addictions court to help those addicted to drugs and alcohol get treatment and support rather than being in and out of prison.

Vermont is not ready for marijuana to be legal, Strong said, pointing out how many different groups explained negative impacts or lack of preparation to regulate it. She voted against the marijuana bill that was voted out of her committee by a split 6-5 vote.

In answer to a question about reining in the state budget, Starr, on the Senate Appropriations Committee, said his committee cut the House budget by $7 million. However, he reminded the three dozen at the breakfast that it does cost money to maintain good roads, good schools and care for elderly Vermonters.

Strong said she voted no on the budget and expects to continue to do so - even though she supports some individual expenditures in the budget.

She said she had to, when the budget goes up 5 percent while revenue only goes up 2 percent.

“I am hoping the next session we will push the stop button.”

Young said he dreams of the day when the Legislature was spending money without worry, creating today’s pension obligations that are underfunded by $2 billion.

He’d rather pay off those obligations that having to go in debt to cover it.