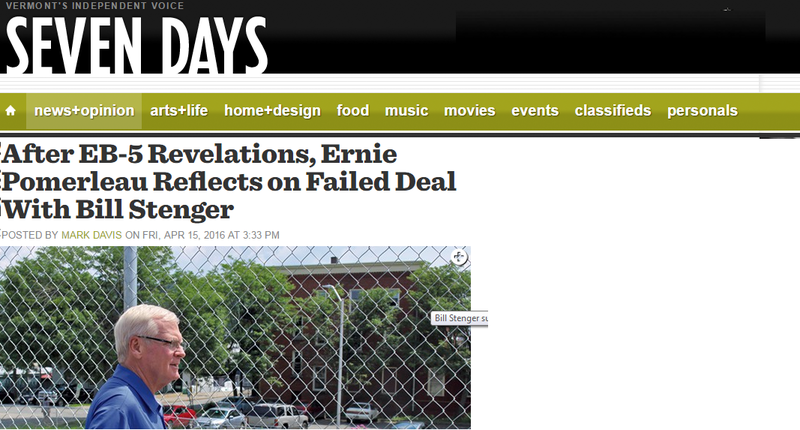 In 2014, Burlington developer Tony Pomerleau backed out of a deal with Newport businessman Bill Stenger after waiting four years for Stenger to come up with the first of multiple $1 million payments.

In 2010, Pomerleau, one of Vermont’s leading developers, had agreed to sell Newport’s prime Waterfront Plaza, a shopping center on Lake Memphremagog, to Stenger, who said he planned to build a hotel and marina there using the same EB-5 investor program he used to transform Jay Peak Resort and launch other projects in the NEK.

Ernie Pomerleau, Pomerleau’s son and CEO of Pomerleau Real Estate, told Seven Days on Friday that his family was fond of Stenger but began to question his ability to follow through on his promises.

“We’re not players that play on hopes and wishes. We play on reality,” Pomerleau said. “After a while you go, ‘It isn’t going to happen.’ There’s a difference between what you want to happen and what you know will happen. It was very clear this wasn’t getting done in an efficient manner and we had to move on.”

However, Pomerleau said he did not suspect the severity of problems with Stenger’s operation. The Securities and Exchange Commission on Thursday accused Stenger and his business partner, Ariel Quiros, of running an operation akin to a Ponzi scheme.

“The magnitude of this is far, far beyond anything that I could have seen or expected,” Pomerleau said. “I was as shocked as anyone else.”

Pomerleau said his family plans to continue doing business in Newport, and could consider additional opportunities. After the deal with Stenger fell through on the plaza, they decided on a $1 million overhaul of the facility, and, Pomerleau said, business there has been going well.

But the developer said he expects rocky times for the Northeast Kingdom’s economy with Stenger’s and Quiros’ projects on hold.

He considers Stenger a friend and is puzzled about his alleged actions.

“Bill is a very nice man. I don’t know what happened to him,” Pomerleau said. “This is out of a tabloid you read about in another state. It’s like Star Wars, going to the dark side. I know Bill always saw himself as helping the area. I know Bill has a big heart and I know he wanted to help the Kingdom. Why he went astray, or let himself be led astray, I don’t know.”