Greystone closes on site of mixed-use tower in Miami: $8.8M

New York-based Greystone paid $8.8 million for a vacant lot in Miami with plans to develop it into a luxury apartment tower with ground floor retail space.

Greystone bought the 34,690-square-foot development site at 1501 Southwest 37th Avenue, which is across the street from the Publix-anchored Douglas Grand shops. The sale breaks down to about $254 per square foot.

When completed in 2018, the project will include 6,500 square feet of retail space, and 91,000 square feet of residential space divided into 100 one- and two-bedroom apartments. Borges and Associates designed plans for the 14-story building, according to a press release. Amenities will include an outdoor pool and spa, club room, business center, 24-hour fitness center and units with private balconies. The development will also feature two townhouse-style units with rooftop terraces.

Miami-Dade County property records show Gables EB5 Ventures LLC sold the land. The company, which is managed by Ivan Rodriguez of Ocala, paid $6.5 million for the property in 2014. 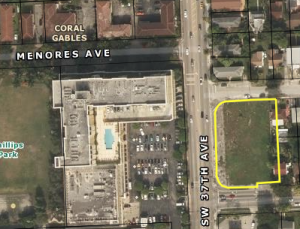 Greystone has other projects in South Florida, including 2500 Biscayne Boulevard, a 20-story luxury apartment building near Edgewater and downtown Miami. That project also has ground floor retail.

Along with Alta Developers, Greystone co-developed the Mile, which is near this most recent project. The joint venture then sold the luxury apartment building at 3622 Southwest Coral Way for $48 million in December.

The developer focuses on high-end boutique rental and condo projects.