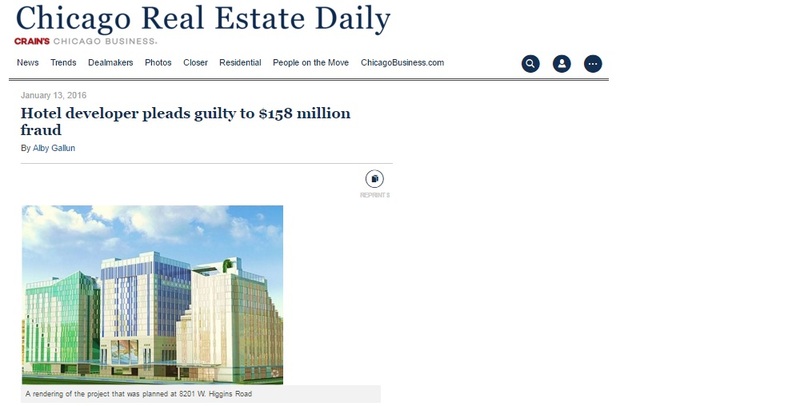 The developer of a failed $912 million hotel project near O'Hare International Airport has pleaded guilty to charges he defrauded Chinese citizens who invested in the development through a federal visa program.

Ashoo Sethi, 32, admitted he used bogus and forged documents to raise money for the three-hotel, 995-room project at 8201 W. Higgins Road, which never got off the ground, according to his plea agreement.

More than 290 people invested about $158 million in the hotel through the federal EB-5 program, which grants foreigners permanent residency if they invest in qualified business ventures. The program, which recently was extended by Congress, has been popular with developers, but critics say it is vulnerable to fraud and mainly funds unworthy real estate projects in wealthy neighborhoods.

Sethi has returned $146.5 million of the money for the project and is trying to collect the rest, much of it fees and commissions paid to brokers, according to the plea agreement. A development venture led by Sethi sued some of the brokers last month demanding that they return the money.

A federal grand jury indicted Sethi in 2014, about four years after he began raising money through the EB-5 program. He pleaded guilty yesterday to one count of wire fraud; the nine other counts were dismissed.

The maximum penalty for the offense is 20 years in prison, but federal sentencing guidelines call for a sentence of 78 to 97 months, or six-and-a-half to eight years, according to the plea agreement.

To show investors that he had relationships with big hotel chains, Sethi filled in the blanks of an unsigned draft letter from Hyatt Hotels and provided it to brokers, according to the agreement. He admitted that he provided the intermediaries with expired franchise letters from Starwood Hotels & Resorts and InterContinental Hotels Group to show that he had deals with the chains when he didn't, the document says.

Sethi also acknowledged that he lied when he communicated to the investors that the state of Illinois was investing in the project. And he admitted that he created phony documents to show investors that the city of Chicago had agreed to provide $97 million in tax-increment financing for the development, according to the plea agreement.

“Mr. Sethi will continue his persistent efforts to honor his commitment to make the investors whole,” his attorney, Patrick Collins of Perkins Coie, said in a statement. “Through litigation he initiated both here and in China, Mr. Sethi seeks to recover the nearly $5.7 million that was advanced to licensed Chinese brokers and which should have been refunded back to investors by the brokers upon the termination of the project. Mr. Sethi looks forward to providing the court the complete picture of this unfortunate saga.”