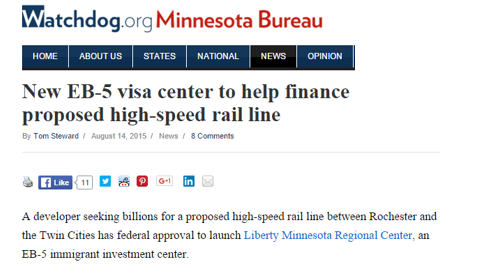 A developer seeking billions for a proposed high-speed rail line between Rochester and the Twin Cities has federal approval to launch Liberty Minnesota Regional Center, an EB-5 immigrant investment center.

North American High Speed Rail group has been quietly negotiating with the Minnesota Department of Transportation to conduct a feasibility study and for exclusive rights to build an elevated line along the 84 mile Highway 52 corridor.

The Minnesota-based group plans to raise much of the estimated $4.2 billion — in private capital from foreign individuals and governments, including China — to finance the rail project. The EB-5 program provides permanent green cards to foreign investors who invest $500,000 to $1 million in businesses or economic development projects that create or preserve at least 10 jobs for U.S. workers.

EB-5 “immigrant investors” could comprise 10 percent to 20 percent of the financial backing for the controversial private rail proposal, which has stirred opposition among skeptical residents and communities along the route.

“EB-5 has never been ruled out as a potential source for this project. We are just preparing with a much larger part of our capital stack with private investment and supplementing as needed and where appropriate with EB -5,” Joe Sperber, NAHSR CEO and Liberty Minnesota owner, said in an email.

In some states, the visa investor program has proven controversial. For example, a $115 million South Dakota meat-packing plant — financed largely by EB-5 investors — went bankrupt in 2013, leading to the suicide of a key manager who faced probable indictment amid a FBI investigation, according to media reports.

USCIS posts an investor alert warning about potential scams, as well as a list of 34 regional centers terminated for failing to file required forms or meet economic development goals.

The Liberty website tries to recruit potential investors. “The EB-5 program has proven to be a highly beneficial permanent residence option for the wealthy individual … it enables a foreign national to obtain permanent residence status more expeditiously than with most other visa options.”

Liberty Minnesota promises “several exceptional projects to offer foreign investors. Our first project through this regional center will be called EdCampus,” a Chaska venture with openings for 296 investors. Applicants pay a $5,000 deposit to hold their place in a specific project, with the balance due within 90 days.

“We are focused on job creation and providing supplemental financing to projects in need of support in Minnesota and across the US,” Sperber said in the email. “Our initial ventures have been in hospitality and long term care but we are looking into other markets like medical device, clean energy and potentially transportation.

A key state legislator, whose bill prohibiting public funding for the rail line passed in the Minnesota House, is concerned about direct investment from foreign governments.

“I think it’s a very, very, very legitimate concern. And I’ll leave it at that,” Rep. Steve Drazkowski, R-Mazeppa, said during an Aug. 6 grassroots meeting of people opposed to the project.

While the immigrant investor program may be a conduit for financing, it’s no silver bullet, according to a long-time Minneapolis immigration and investment attorney.

“The EB-5 program is not a spigot of instant funds for anyone,” said Scott Borene, a principal with the global immigration group at Borene Law Firm. “Nor is it an instant way to reliably qualify for a green card. It is among the most complicated and time-consuming of all the possible ways to qualify for a green card, and expensive.”

NAHSR claims to have the investors lined up to fund a feasibility study, if and when Gov. Mark Dayton signs off on the deal negotiated with MnDOT.

“There’s actually quite a bit of interest around the country in private high-speed rail development,” said Wendy Meadley, a public relations consultant for NAHSR.