Golden Gate Global (GGG) is making a strong impression in both China and the San Francisco Bay Area. "Over the years, we have worked with hundreds of EB-5 (the immigrant investor program in the US) clients from over 12 different countries," says Ginny Fang, GGG's CEO (www.3GFund.com). "Most of the families we work with are from Chinese mainland, seeking access to quality international education, employment and lifestyle opportunities for their children."

"I am proud that, for these families, GGG has helped bridge access to such opportunities in the US," she continues. "Simultaneously, we are adding jobs to the US economy through the EB-5 investments."

Located in San Francisco's financial district, GGG is recognized as one of the leading EB-5 regional centers in the US, and has been officially designated by its government to facilitate foreign direct investment into the country through the immigrant investor program.

The program, operating under the auspices of US Citizenship and Immigration Services (USCIS), is designed to encourage the flow of foreign capital into the US economy and assist in domestic job growth. Through it, foreign investors can enter into an expedited process for permanent residency in the country. Final approval is subject to formal verification that these investments have created at least 10 permanent US-based jobs. 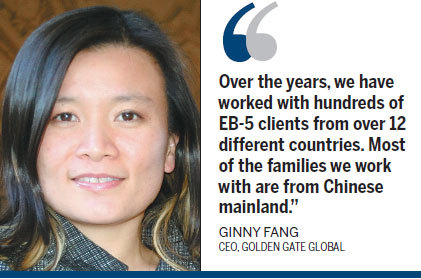 "GGG has distinguished itself from its competitors through an established approval track record with USCIS, blue-chip project partners, financially secure projects and industry-leading fund management and reporting protocols," says Fang.

One of the company's most prominent EB-5 programs is at the 775-acre San Francisco Shipyard development. As the City's newest waterfront community, the project will create 12,000 new homes, two major retail centers, commercial office space and more than 121 hectares of parkland.

As part of a national selection process, Lennar Corporation was chosen by San Francisco as the master developer for the Shipyard. Home construction (part of GGG's EB-5 program) started in 2013, and home sales began in the late summer of 2014. The project has completely sold out its first two releases. In San Francisco's nation-leading real estate market, projections for continued success at the Shipyard are stronger than ever.

"Lennar is pleased to be partnered with GGG to represent the EB-5 program at the Shipyard," says Kofi Bonner, president of Lennar Urban. "GGG has been a successful, effective and reliable EB-5 partner."

In fact, GGG's EB-5 program at the Shipyard has performed remarkably well for both investors and the project itself. With a 100 percent USCIS approval rate for investors and Shipyard home sales well underway, hundreds of families have already invested with GGG - accessing new opportunities for future generations in the US.